I love getting together for a chat with a friend over a cuppa coffee or tea. Time together without distractions lets me concentrate on the person I’m with and really hear his or her stories. We get to catch up on each others’ lives and continue cultivating our friendship.

Picking up from where we left off last time, it's as if it was only yesterday since we were together. News about family, travels, business ventures, health issues, and our latest projects take center stage. How are the grandchildren? How’s the new knee doing? What are you writing? We exchange ideas about world events and discuss future plans. Where’s your next trip?

We celebrate our blessings and console each other over the bad stuff. We ask for help. And, we figure out what we can do to give it. The time and the talk demonstrate our importance to each other.

Many of us lead busy, full lives. I’ve learned that touching base by phone or email, and finding an hour or so to get together, ensure that I can keep up with my peeps in person. Tending to friendships means making time for friends in our lives. When time together is a priority, the friendship becomes richer and deeper.

Though the staff at Starbucks or Camille’s or Panera Bread may begin to recognize me on sight, they shouldn't think it’s about my desire for coffee. It’s all about my love of connecting and having face-to-face time with friends.

When have you had time with a friend? 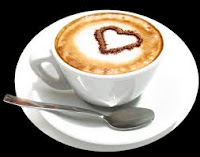 The atmosphere in the theatre bursts with excitement and expectation as we wait for the curtain to go up. When I am sitting in the audience and the lights go down and the performance begins, I am a happy woman.


I’m geared up to see the play or the musical, but also I’m beyond curious about how the company will make us suspend belief and be present with them in the story. That goes for student or teacher-written school plays and local theatre as well as professional offerings.

While in high school, I was bitten by the theatre bug. I ushered at the Detroit Institute of Arts when it was an occasional venue for plays. I remember being captivated by Lorraine Hansberry’s A Raisin in the Sun, a play about a black Chicago family that the New York Times said, “changed American theatre forever.”

On my first trip to London in the late 1980s, a friend and I stood in a long line at Leicester Square’s Half-Price Ticket Booth our second day in town. We didn’t know what plays might be available when we arrived at the window, but we didn’t care. They had tickets for Blood Brothers, a musical, playing at the Noel Coward Theatre. We’d never heard of it but were thrilled just to be going. The actors and the story of fraternal twins, separated at birth, who fell in love with the same woman, drew me in immediately.

We’d had such incredible good luck with this venture that we headed back to the Half-Price Ticket Booth as soon as we left the theatre, eager to see what tickets we could get for that evening. Other memorable performances filled the rest of the week.

Over the years, I’ve seen dozens of Broadway touring productions and supported local theatre in Bakersfield and in Coos Bay. Attending the Shakespeare Festival in Ashland, Oregon, several different summers has added to my delight. Anticipating the coming of The Book of Mormon in Los Angeles last fall, Judy and I bought our tickets six months in advance. 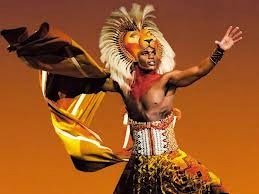 I've witnessed electrifying, costuming, staging, and acting. But, the most outstanding has to be The Lion King. Four of us friends settled back in great center seats in the Las Vegas theatre. The overture began and the stage lit up. Soon the entire cast began to make their way down the aisles from the back of the theatre. Surrounded by the grandeur and majesty, the joy and the singing, a lump rose in my throat. When the elephant and her baby came into view, I couldn't hold the tears back any longer.  I glanced down the row at my friend Marilyn. At the same time, she looked toward me. There we were, the two of us, struck by the beauty, filled to overflowing, wiping our eyes, wanting to see more. It was an unmatchable, goose bump-erupting moment.

What I love about live theatre is that it shows me myself and the world, truths and dreams. It moves me, tickles me, teaches me, and makes me think. Theatre makes me sing. Never mind that I’m a bit off key.
~ xoA ~ 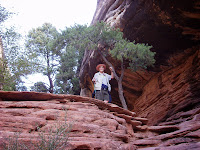 A walk in the park invigorates, takes one outside a gym for exercise, allows for relaxation. But a hike takes the great outdoors to a whole different level. A hike is an adventure of discovery. What’s up the next ridge or around the curve? Which of these bark-lined paths is the real trail? What historical artifacts will we find?
Last weekend, Judy and I joined Oregon’s South Coast Striders for their bi-monthly hike. Eager to investigate nearby trails that we’d never hiked, we gathered our day pack, water, snacks, walking sticks, and knee braces. The day, sunny with moderate temperatures in town, turned cold and windy as we rendezvoused at the Point Arago starting place. We layered up with jackets and vests, happily finding gloves in our pockets. 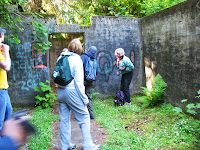 Soon, we were off with a group of 25 or 30 others over a new section that had been recently added, reconfiguring the trail into a loop. Our leader took us off the main path at one point to show us a World War II bunker that stood abandoned and roofless under huge trees in what had been goat fields seventy years ago. He told us an account of the bunker’s purpose and layout from a local man who’d been an Army corporal back then. Turns out, he was someone we knew. 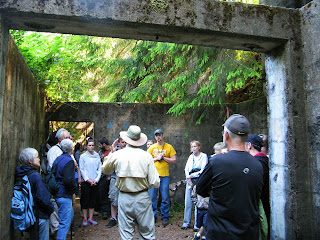 One of the things I enjoy about hiking is going out to new territory, meeting the challenges each place presents, and testing myself. Can I find my way? Do I have the stamina for this hike?

Hiking is one way to get up close and personal with nature. You’re immersed, touching, seeing, smelling, listening, even tasting. All senses are heightened, standing alert, doing exactly the jobs for which our long-ago ancestors used them.

Most planned hikes are rated: easy, moderate, or difficult. At national and state parks, there are often maps that show the trails and the topography. Thus, hikers can choose the perfect jaunt for their ability and endurance.

Four years ago, Judy and I made a tour of the National Parks and Monuments of Utah. We began with Zion then moved on to Bryce Canyon. Before the week was finished, we’d hiked Canyonlands, Arches, and Capitol Reef. The varied terrain and landscapes within a relatively small area fascinated us. At one park, I experienced my first time climbing over rocks, having to note the stone cairns that marked the trail since there was no bark path to follow. The vistas provided us a view of our great land and showed us some of what the early settlers and pioneers traversed.

Hiking gives me a feeling of freedom and the wonder of nature. It shows me that I can manage in a natural setting and feeds my need to discover and learn new things. So many trails; so little time.

Do you enjoy hiking? What’s your favorite hike or trail? Have you read Bill Bryson's A Walk in the Woods or Cheryl Strayed's Wild?


By no means am I a gourmet cook. But, I drool over almost every recipe that my friend Kate of A Spoonful of Thyme posts.

I’m more a regular-mom-type cook.  I often plan a menu around a particular entreé or ingredient. But occasionally, I take inventory of the pantry and fridge and come up with dinner. It becomes a challenge when we are about to leave on a trip and want to use up whatever is on hand. That's when we have interesting meals, like scrambled egg-and-veggie stir fry with corn tortillas. Judy calls it “making something from nothing.”

I love to get creative and concoct flavorful soups. There’s something meditative about chopping, dumping, stirring, tasting, and adding a little of this and that to the soup pot. Simmer on low for a couple hours, and something unique and delicious results. Unique means the dish can never be duplicated exactly. Sure, I can write down what I did this time, but a difference of heavy or light-handedness and the impulse to add or try a new spice will change the flavors a bit. But, that doesn’t matter since enough time has usually passed that only a faint memory of the earlier batch’s taste lingers. 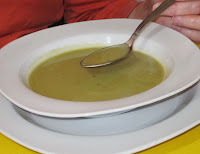 The flavors in soup meld together with a little time and are usually best the 2nd day. So, I will often make it ahead for maximum deliciousness. When I don’t have the luxury of time, and serve up the newly-made soup that day, it’s a compliment to hear, “Pretty good for first-day soup.”

Yes, I follow recipes, too -- at least the first time I try a new dish. Then I analyze it and may make adjustments.  For example, I’m experimenting with substituting gluten-free flours and cutting down on sugars. I may use egg beaters or try to lighten up a dish by switching to reduced-fat cheese.

In my cookbooks and recipe file, I have dates with modifications and notes scratched in the margins: “Added 7oz. green chilies” and “Made w/breakfast chicken sausage”. It’s interesting to see the evolution of a dish. I also note the family’s reaction: 5/13 “Best one yet!”

Cooking is a fulfilling and creative outlet for me that also brings pleasure to others. It’s an accomplishment, especially for a woman who started married life as a teenager with two dishes in her repertoire: chocolate chip cookies and scrambled eggs.


What favorite dish, either yours or your family's, do you make?


As much as I love to travel, coming home is sweet.
“Coming home.” Those two words bring a smile of remembrance and satisfaction. On the last leg of the journey, “home” is the prevailing thought.

I love when we turn the corner after being away. Our light green Bakersfield house comes into view, then our purple door. Once inside, we’re surrounded by colorful souvenirs and art from places we’ve visited. The comfort of our home renews us.

It’s great to be among my own stuff, in my own space. A familiar bed, a favorite chair, appliances that I know how to work. No bright light shining in my eyes, disturbing my sleep. We bask in our yard with the trees and plants that Judy placed in the ground, the funky art work that adorns our backyard fence, and our “tableaux of interest” as brother John puts it. 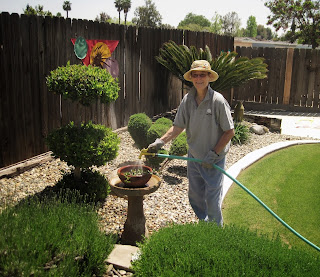 Coming home is a break from being on sensory overload. It’s a respite from being inundated by new sights, sounds, and tastes. I get to reconnect with myself in the familiarity of an environment that we’ve created. It’s the perfect place to rejuvenate and get ready to go again, knowing that it will be right here when I return.

In Coos Bay, this is our sixth summer in the Birch Street house. Now, this place is like coming home, too. But, that’s true of the whole town.

There is no place like home; or, wherever one feels at home.