Children's Literature -- Not Only for Kids

This week, Jeopardy fans watched while Las Vegas resident James Holzhauer broke the record for single-day cash winnings. While the newspaper article I read was all about his big earnings, as a writer, the nugget that jumped out at me was this:

Holzhauer claimed his secret weapon for learning information was children’s books. “They are chock-full of infographics, pictures and all kinds of stuff to keep the reader engaged.”

Such a great lead-in for the review of a children’s book I’ve wanted to share on The DayMaker. So here you go. Meet Sallie in her story told by a children’s author and a fellow member of Writers of Kern. 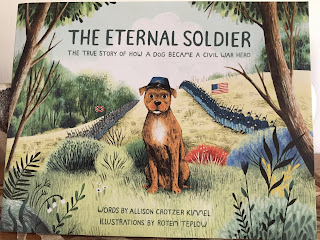 Allison Crotzer Kimmel’s picture book, The Eternal Soldier; the true story of how a dog became a Civil War hero, celebrates the loyalty, bravery, and devotion of Sallie, the pup who becomes a mascot of the 11th Pennsylvania Volunteer Infantry. Through Kimmel’s endearing story and Rotem Teplow’s colorful, detailed illustrations, we learn how Sallie, in turn, brings out the soldiers’ kindness and humanity in the face of devastating times on the battlefields.

Sallie, a four-week-old pup, is brought to the volunteer infantry in a basket. The men take to her immediately, and she to them. She immerses in camp life, marching beside the soldiers in drills, responding to bugle calls, and boosting morale. Soon Sallie was marching into battle and standing her ground with the flag bearer who raised “the colors.”

After the long, difficult battle at Gettysburg, Sallie guarded and comforted the fallen men, remaining by their sides until help came and all the men were taken care of. Two years later, at the battle at Hatcher’s Run, Virginia, Sallie herself is hit by enemy fire. Her men never forget her, and twenty-five years later a monument that included a bronze statue of Sallie was erected and dedicated to the soldiers of the 11th Pennsylvania Volunteer Infantry.


Allison Crotzer Kimmel tells Sallie’s story with heartfelt compassion and the accuracy that diligent research brings. The Author’s Note provides historical names and places of Civil War battles, information about military rituals and traditions, a glimpse of Sallie’s time with the 11th, and excellent resources for exploring more of Sallie’s life.

I highly recommend Kimmel’s The Eternal Soldier, published by little bee books, for youngsters eight years of age and older and their parents. With its educational value, positive message and role models, and its accurate, but un-sensationalized, depiction of the battlefield, this book is an essential addition to home and library collections.

Posted by Annis Cassells at 6:39 PM No comments: