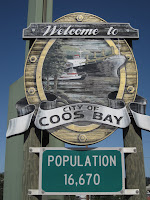 People tend to make wisecracks about living in small towns. Yes, you’ll probably run into someone you know, no matter where you go. It’s especially true in the coastal towns that we call “home” in the summer -- Coos Bay, population around 16,000, and North Bend, about 10,000 strong. But that’s part of the charm.
Last week, at Books by the Bay, a fellow Second Wednesday book group member and I met up unexpectedly. We sat at our own tables, each of us writing in a notebook, but then had a few moments for pleasant conversation and book recommendations. 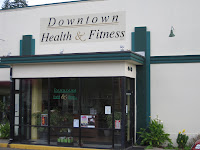 While shopping this morning, I ran into Joe. “Why aren’t you at the gym?” he asked as we stood in the store’s wide aisle and greeted each other. The gym, Downtown Health & Fitness Center, is a hub of the community. We not only work out and sweat, but DH&F is the gathering place for groups of people who have become friends -- and if we don’t show up, inquiring minds want to know why.
The Fitness Center social network extends to outside activities and acts of genuine friendship and kindness. Our hearts are still warmed over the June Zumbathon. It was a highly-successful fund raiser that my friend and fitness center owner Deb Lal and her staff organized to benefit a co-worker who is undergoing cancer treatment.
Things happen in small towns that big-city folks often cannot imagine. My first summer here, I belonged to a writers’ group that met bi-weekly at the North Bend Public Library. I noticed that an upcoming meeting was scheduled for the staff in-service day, when the county libraries would be closed. “No problem,” one of the librarians said. “You can take the key and come on in. Just lock up when you leave.” Handing me the key, she said, “Just bring it back the next day.”
A few years ago, I took my motorcycle to Honda World to have it checked and the oil changed before a big trip. This dealership sells and services both motorcycles and cars. As the service manager wrote up my order, he said, “You must have some errands to do before your trip. Take that loaner out there,” he said, nodding toward a car standing by in the parking lot, “and we’ll see you in a couple of hours.”  Next thing I knew, I was wheeling off to pick up some last-minute items. Does that sound like your local dealership?
Two friends, Laurie and Marilyn, both have stories of different mechanics who loaned tools to them. Each was sent on her way with a wave and the trust that she would bring the tools back when the job was finished.
Last winter, my friend Rosalie arrived at the post office window to mail a package and realized that she’d changed purses and had no wallet. The clerk said, “I’ll mail it, and you can bring me the postage next time you’re in town.”
Stories of small town big-heartedness no longer make me shake my head in disbelief. They make me smile, and they continue to renew my faith in the goodness of people. 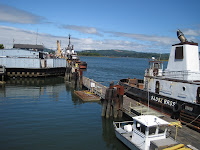 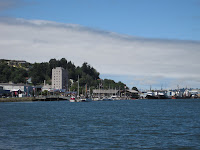 What’s your “small-town” story, whether it takes place in a large city or in a small town?
~ xoA ~
Posted by Annis Cassells at 8:00 PM 9 comments:

June 1st, the beginning of summer and time for our annual trek to Oregon. I was riding my motorcycle, and Judy followed in our car, which was loaded with our summer-living necessities. We’d expected a bit of rain, and I was prepared. The entire day, I wore my rain pants, pulled down over my jeans and boot tops, and my fluorescent yellow rain jacket, velcroed tightly around my neck and sleeves. It did rain off and on, and occasionally, I’d stand on my pegs so the wind would clear the water off my face shield.
By early evening, traveling north through the mountains on I-5, around Mt. Shasta City, the skies darkened and the rains began again. It was noticeably colder, and I thought about changing my gloves. Rounding a curve, just south of Weed, we ran smack into wet, blanketing snow. It had already stuck on the ground and quickly covered my windshield.
Survival mode kicked in immediately. I lifted myself to a squat to see over the windshield. Adrenalin and thoughts exploded. Two motorcycling adages came to mind as I had to take my left hand off the handle grip and swipe snow off my visor: “Slow down and hold tight.” and “Chin up, stay up.” I did both and concentrated on keeping upright. Then, I tried to recall the three Weed exits -- Were the off-ramps curvy? How steep were they?  Where were the motels?
Slowly and steadily, I steered the Goldwing to the North Weed off-ramp, a straight slab of snow-covered cement, where two easy right turns led us into the parking lot of the Motel 6. What a relief! But, I didn’t breathe easily until I was fully stopped, the side stand was down, and the bike was turned off. Then, I climbed off and began shaking. I had made it! I’d kept the “rubber side down” and was safe.
When faced with any kind adversity, we all dig deep inside and come up with exactly what it takes to get ourselves through. Each of us has learned from experience and observation and can call on the skills, knowledge and reserves within us, whether the tough situation is dangerous or scary or emotionally risky. I’ve learned that slowing down, holding tight, and keeping my chin up works for almost any challenge. And, as Winston Churchill is supposed to have said, “When going through hell, [we] keep going.”
Have you had any recent storms to weather in your life? What inner resources did you draw upon?
~ xoA ~
Posted by Annis Cassells at 6:28 AM 4 comments: