As I've mentioned before, hearing back from you would be wonderful. It would also provide an opportunity for other readers to benefit from your ideas and experiences. And it could make all of our days.
Several folks have told me they've wanted to comment on a post or respond to others' comments. They'd spent time typing a comment only to have it NOT show up. Then they spent more time trying to get it to work. After way too long and becoming exasperated, they'd given up.
Judy researched it and discovered a way that those whom do not have a "Google Account" can post comments as "Anonymous."
Here are the steps she found to work:
1) Go in by clicking comments after a post.
2) Write your comment. You can also put your name or handle afterward so it's not truly an anonymous post.  Or you can leave it as "Anonymous."
3) On the drop down menu click "Select an ID". Go down to Anonymous and click.
4) Preview to see what you wrote.
5) Click on POST (2x). The first time just takes you to a different screen; you have to click POST again.
6) Word verification (those squiggly letters so "they" know you're a real person) and submit.
I hope this helps clear up some of the mystery of commenting and will encourage interaction on The DayMaker.  Also, feel free to sign on as a "Follower" if you'd like. You can see who that group is on the upper right of the page.
As always, you are welcome to send me a private email.
Meanwhile, take good care of yourselves, and make it a great day.
~xoA~
Posted by Annis Cassells at 5:06 PM 2 comments: Links to this post

Valor in the Pacific

While vacationing on Oahu in Hawaii, we took a day to visit the World War II Valor in the Pacific National Monument. It was a visit filled with pride and emotion as we witnessed the accounts of the morning of December 7, 1941, re-learning long-forgotten facts about the build-up to the Japanese strike and the damage that was done.
News footage and civilian movies provided devastating sights and sounds of that day in the documentary we watched before boarding the boat that took us to the waters near the USS Arizona. As luck would have it, we chose a day in which some type of renovation work on the actual memorial site would keep visitors from setting foot on this hallowed piece of history. Somewhat disappointed, the whole boatload of us made the best of the situation.
In the newly-finished museum, video interviews with service men and women who lived through the ordeal added human faces and emotions. Then, there were the children's perspectives. Adults who were part of the community as children told their stories of that morning and of the aftermath when they lived under martial law. One resident said, "We had gas masks in our arms and hibiscus in our hair."
Taking in the museum, I was impressed that there was no shying away from the despicable part that our government played in the treatment of Japanese-American citizens after Pearl Harbor. Video clips, photos and interviews show military families and citizens of Japanese descent in their anguish over the attack, the subsequent stripping of their rights, and the dehumanizing internment camps.
Additionally, on the recommendation of our friends Sissi and Vic, we also took in the USS Missouri, which is docked in Pearl Harbor. This massive battleship served our country in three wars: WWII, the Korean War, and Desert Storm. It is the site where the Instrument of Surrender between Japan and the Allied Forces was signed in September of 1945. Seeing where this history-making event happened and touring the Missouri, where our service men lived and worked and died, my emotions reached the surface more than once.
I am reminded that we do have a great country with a heritage of valor and honor. And, I'm proud to be an American.
xoA
Posted by Annis Cassells at 4:24 PM 6 comments: Links to this post

Be fully present in the moment.  This can be a tall order as we go mindlessly through our daily routines. We may drive on auto pilot and wonder how we got to our destination. We think about and solve the world’s problems while doing dishes, vacuuming or folding clothes. Sometimes we daydream as our loved ones tell us about their day.
One thing I’ve discovered while vacationing in Hawaii is a sure-fire way to stay focused in the present. Take a hike!

I told my friend Sandi O., who said, “I don’t know why anyone would want to HIKE!” that hiking, in addition to being great exercise, is a wonderful way to be a part of nature. Unimaginably beautiful views await the hiker. “It’s fun!” I said with conviction.
Now I would add that hiking keeps me in the here and now. Realizing that one false move could be disastrous, I scan the trail a little ahead and then concentrate on each step between me and there. I look for the easiest way to traverse a rocky or root-filled path and notice gravel and slippery spots that I’ll want to avoid. No other thoughts intrude; there is no daydreaming. My motivation is staying upright and safe, and I am fully in the present moment. 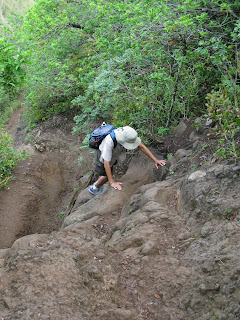 In two days here on Kaua’I, Judy and I have done two challenging hikes, the Sleeping Giant and the Pihea Trail in Koke’e State Park.

In addition to feeling the pride of accomplishment and experiencing these amazing natural settings, I recognize that staying in the moment is something I need to do more regularly.
How do you stay present in the moment? I’d love for you to share how you do this.
~xoA~
Posted by Annis Cassells at 11:36 PM 8 comments: Links to this post

Relaxing, renewing, and revisiting. Beauty fills the soul as well as the eyes, ocean breezes caress and cool the skin, and magnificent sunsets warm the heart. This is the Big Island of Hawaii, home of Kona coffee, two magnificent volcanoes, and an amazing rainforest.


The best sleep in the world happens here each night as the ocean’s soothing, repetitious sounds create a cocoon that’s only penetrated by the morning light. Then you awake to see breaking waves, in pale orange stripes, straining forward to smash into the lava rocks below us. Time for breakfast on the lanai. 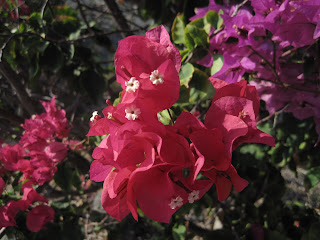 We were last here at sister Jan’s in Kailua-Kona in 2008. A few things have changed. But most is still the same, notably, the ease and beauty of being here, the bursts of color in every direction, and the spirit of aloha within each person we meet. This is truly a splendid place to practice the 3 Rs.
Just walkin’ my talk,
xoA 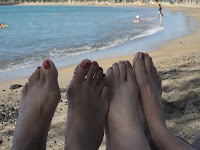 Posted by Annis Cassells at 7:27 PM 3 comments: Links to this post