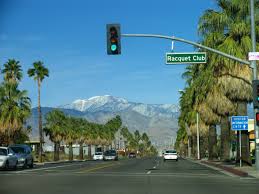 I think of our annual visit to Palm Springs as routine, but it will never be that again, not since my 2009 breast cancer diagnosis. Now it’s a trip that is a mix of apprehension, diversion, triumph and relief.

Each March we zip down to Palm Springs, a 450-mile round trip, for our mammograms. Judy and I try to make it a mini-vacation. We look for new places to eat and things to do and often reminisce about past times there.

St. Patrick’s Day, we poked our heads into the casino and meandered among the maze of dazzling, beeping machines, searching for nickel slots. Finally, we were able to discern that we stood among a mob of machines that took pennies. Even better; we could play longer!

Judy reached into her pocket for change and divvied it up between us. We found a machine that called to us and examined it, looking for the place to insert our coins. There was none. Frequent player cards or bills or tickets, yes; but no place for actual coins.  Winning a fluke jackpot on our last penny would not be in our near future.

March is a perfect time of year to visit Palm Springs. We stepped out of the heavily-perfume-masked air of the casino into an 85° sunshiny day. The sounds of St. Patrick’s Day partiers rang out as we strolled toward Palm Canyon Drive. The heat coupled with images of mugs filled with green beer intensified our thirst. 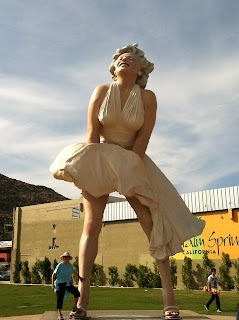 Along with us, a throng of other tourists gravitated to the corner lot where Marilyn Monroe, in that memorable dress-flying pose, loomed above us, nearly touching the sky.  She’s gorgeous. “Forever Marilyn” is part of Seward Johnson’s Icons series.


The real reason for being in Palm Springs sobered me as we entered the Desert Comprehensive Breast Center the next morning. I had no disturbing symptoms; it was “just” the annual checkup.

My mammogram technician Cheryl, a self-proclaimed perfectionist, re-took pictures that didn’t satisfy her and the radiologist. When she returned with a large red A+ written at the top of my report, I began to relax.

The exam by my surgeon, Dr. Laura Lee, was next on the schedule. Her first words, “Hello! Your images look great!” produced a run-away smile on my face.  Unrealized anxiety released on the spot.

Four years have passed since my surgery. Each year I’m grateful to hear good news that brings the knowledge that I’m taking care of myself and predicts a healthy future.

I encourage you to make your own mammogram appointment if it’s been awhile since your last one. And, I want you to urge your loved ones to make theirs.
~ xoA ~

Posted by Annis Cassells at 10:36 PM No comments:

So Others May Eat


The older, mostly-female crowd emerged from the dim passageway into the light of the courtyard of La Parroquia, the parish church of San Miguel de Allende. Some shuffled in, some walked with canes, some held onto the arms of friends and daughters. These deeply-weathered, elderly women and men are among those perched daily on steps or street sidewalks, selling small sacks of pepitas or gum or little items as a way to help their families survive.

Many had walked miles to be at the Wednesday lunch provided by So Others May Eat (S.O.M.E.) As they passed through the courtyard, already set up with colorful, cloth-covered tables, we and the other volunteers of the day greeted them. 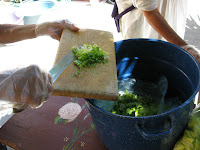 Judy and I continued our job of chopping bagged romaine lettuce into shreds; it would garnish the soup. Several other volunteers lined the walkway, shaking hands, smiling, and welcoming the folks. Bypassing the tables, they filed into one of the rooms that opened onto the courtyard for prayers and songs. 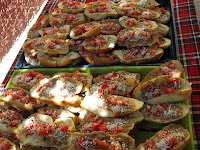 We helpers continued with our prep work. This day, two men slathered bean paste on halved bolillos then topped them with chopped tomatoes and cheese.

Another person cut limes in half and set one in each blue plastic bowl along with a white spoon. The cooks carried large covered pots out to the work table. Lifting the wide lids, curious volunteers discovered a pasta soup in clear broth, Spanish rice, broccoli, mole sauce and stewed chicken feet. 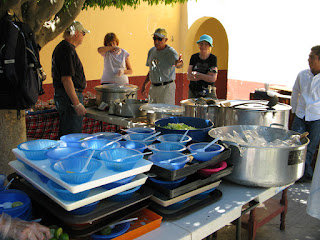 A young man who had been over-seeing the operation came out of the kitchen and served up one plate. This was the example so we could see the quantity and the plate presentation. 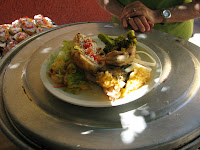 We’d only heard about this luncheon the weekend before from our friend and former San Miguel neighbor, Pam. The owners of The Spa-Hotel Casa del Misionero, who sponsor this benefit lunch, have been doing it each Wednesday since 1989 with the help of volunteers. So, on our last full day in our beloved San Miguel, we’d walked over to La Parroquia to see how we could be of service.

While we stood ready to help when the serving began, more people came in and sat at the tables. They seemed to know where to land because, as Pam explained, there is a seating protocol that’s strictly followed. The eldest sit at the first table, which is one of several that are beneath a shady, roofed area; they are served first. The rest also sit according to age, with the youngest in the uncovered section at the end of the courtyard.

After the lengthy ceremony ended and everyone was finally seated, the group sang one or two more songs. Then, a blessing was said, signaling the volunteers into action filling cups with tea. Judy began ladling soup into bowls held by another volunteer who added the lettuce garnish. Two runners delivered and served the filled bowls to the eager diners.

I scrambled to ready more bowls and find extra spoons when it looked as though we were about to run out. An extra table had been set up to accommodate the overflow of people who needed to be fed.

Hearts warmed, Judy and I both felt grateful for the opportunity to help even a little.

Giving back feels good. I would love to read your story of giving back. So, feel free to share it in the comments section, in an email, or on Facebook.