Advice from a Redwood 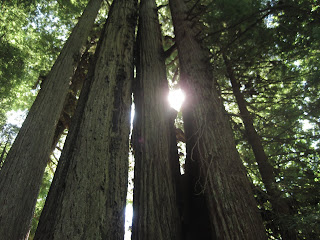 The words leapt out at me from the heading on a tall, thin plastic bookmark on the shelf at the Visitors’ Center at Prairie Creek State and National Redwood Park. We’d spent the day hiking amidst these natural monuments and decided to take one last look around the gift shop.
“Advice from a REDWOOD.” Hmmm, I thought, reading the rest of the text. This is an excellent message for daily life. So, I’m sharing it here with all of you.
Stand Tall and Proud
Sink Your Roots into the Earth
Be Content with Your Natural Beauty
Drink Plenty of Water
Enjoy the View!
~ Ilan Shamir ~
Most of The Redwood’s recommendations ring true for me. Others, I will work on incorporating. For example, I definitely need to drink more water. Which ones are already a part of your attitude and habits?
~ xoA ~﻿
Posted by Annis Cassells at 9:27 AM 5 comments: Links to this post

They changed our lives -- the attacks of September 11, 2001. We witnessed the devastation, felt the sorrow, and suffered the losses as individuals and as a nation. Though watching from across the country, we west coast Americans felt the impact as surely as if it were in our own back yards. It wasn’t “them” who were attacked. It was “us.”
My friend and colleague, Bobbi Emel, featured her September 11th resiliency story on her blog this week. www.bobbiemel.com/blog/ Reading it inspired me to share my story of that day.


The ringing telephone woke us. Our friend Karen had just heard of the attacks and called to let us know what was happening, "Are you listening to NPR? A plane flew into the World Trade Center!" Turning on the TV, we were stunned and horrified at that moment. Even more so when we saw the live shots of New York City. Then came the pictures from the Pentagon and the report of the crashed plane in Pennsylvania.

We watched for a few hours -- as long as we could stand it. Then, we went out for a walk in a beautiful wooded area of Coos Bay called Empire Lakes. Being active and being in nature seemed to soothe our spirits, even though the attacks dominated our conversation.

Next, we drove to the Pony Village Mall, where Karen's cookware store, along with the espresso bar, was a favorite local hangout. Usually, each table in the mall promenade just outside the store entry held a small vase of fresh flowers from Karen's garden. On September 11, candles burned and their glow reflected from the tawny table tops. She had also set up a small TV so everyone could keep up with the latest news. And, yes, the locals had come to be with others and share their feelings and the experience. In disbelief, we spoke in hushed voices as we glanced toward the TV and talked about where we were when we heard the news. This would be a day when every person would vividly recall every detail.
Judy and I were scheduled for a vacation to Egypt the very next week. We'd been practicing our Arabic greetings and tourist phrases with the aid of language tapes and were practically packed to go. That morning of 9-11, the immediate calls from our family contained questions, pleas, and orders about the trip.

“Please, don’t go. If you want to see the pyramids, you can rent the video.”

“You’re NOT going.”
To each person, we said, “Let’s just wait and see what happens.” But, before the end of the day, it was apparent that we would not make that trip. Ever.


Now it’s been ten years. I still have a dull ache in my heart for those lost -- the victims and the rescue workers who were doing their jobs, even when it threw them into peril.  I ache for their loved ones and for the survivors, whose lives were ruthlessly catapulted into an unimaginable track. My ache seems small, when I compare it to what theirs must be like.
But, I remember.
Where were you, and how did you hear the news of September 11, 2001? None of us will ever forget.
~ xoA ~
Posted by Annis Cassells at 7:14 AM 4 comments: Links to this post