Twenty-six posts in 13 weeks. That’ll keep a blogger busy. The same goes for readers and followers. A writer writes for others as well as for herself.  So hearing from readers and fellow writers told me that my goal of reaching other people was being met. Some folks commented on the blog; others emailed me privately. Of no surprise, the post that garnered the most feedback was “I is for Intercourse.”  Most often, responders said, “You really got my attention with that title.”

At meetings, on the phone, or when we’d randomly bump into each other, people would let me know they were traveling with me.

My sincere thanks to you who stuck with me on this challenge, reading along and sharing your memories and experiences and encouraging me in my quest to become a better writer.

And thanks to Judy. She is the photographer who took many of the pictures and often dove into the archives on her external hard drive to retrieve just the photo I needed.

A to Z, I had some difficult choices to make: San Antonio, Sydney, Savannah or Skagway? Columbus, Chapel Hill, Cusco, or Charleston? Michigan, Machu Picchu, Maui, or Mexico City? And, I forgot all about Ann Arbor until I was on to H.

The delicious thing was that I revisited many meaningful places and relived long-ago memories. I heard the cacophony of the Urubama River, in the village where we stayed on our way to Machu Picchu. I suffered the queasy knees of those first steps out on the Sidney Bridge.  I felt the comfort of family and childhood days in Columbus and Detroit.  As Anaїs Nin said, I “tasted life twice.”

For me, it was a marvelous journey -- again. Which was your favorite stop?

Posted by Annis Cassells at 8:18 AM 4 comments:

Z is for Zion National Park 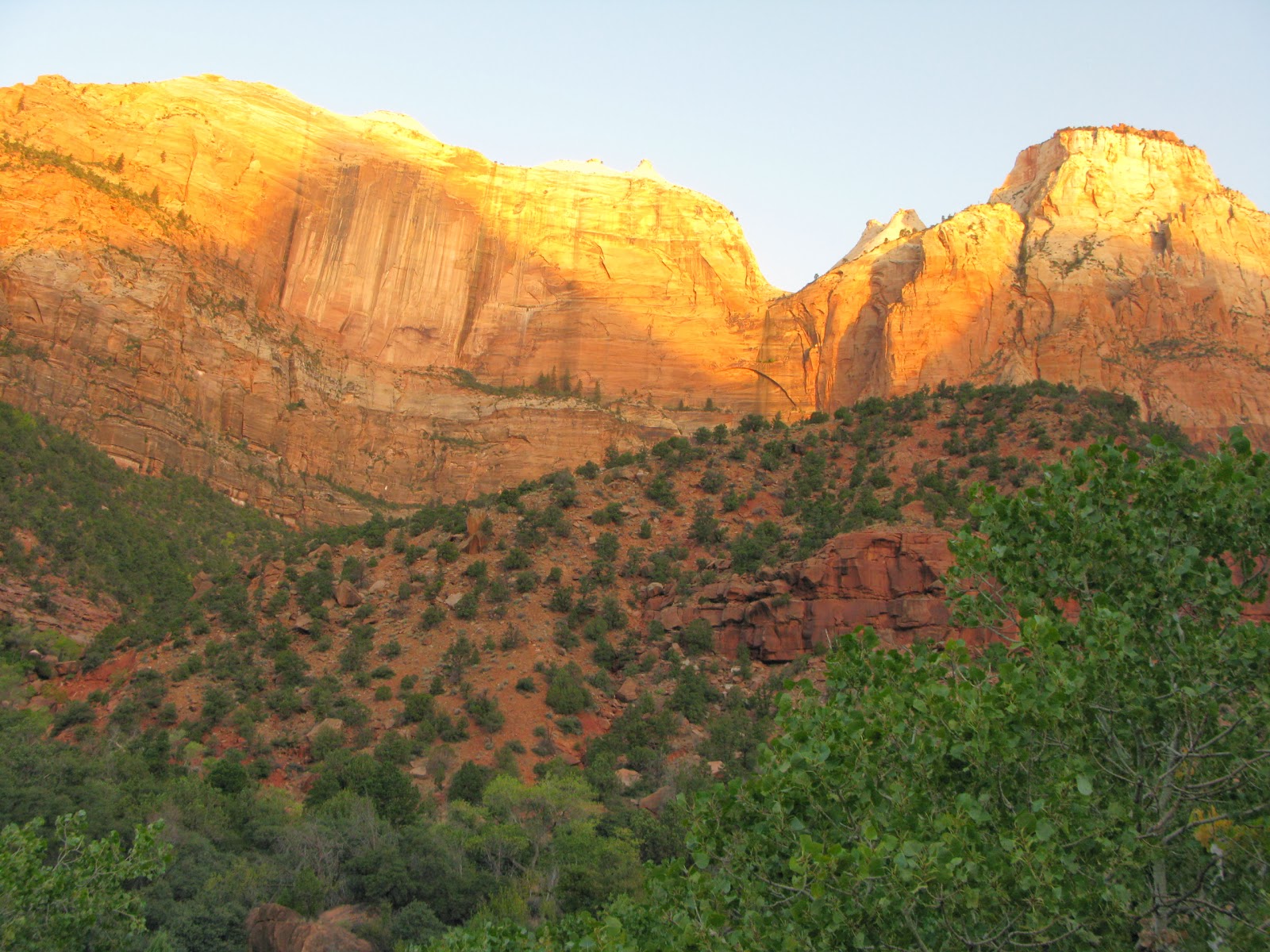 As we approached the entrance of Zion National Park, its majesty rose to greet us.  The massive sandstone cliffs and the valley’s fall landscape inspired lots of photography and exploration. Zion was the first on our week-long journey around Utah, taking in as many national parks and monuments as time allowed. Close to Las Vegas, its southwest location made Zion, Utah’s first national park, a perfect beginning. 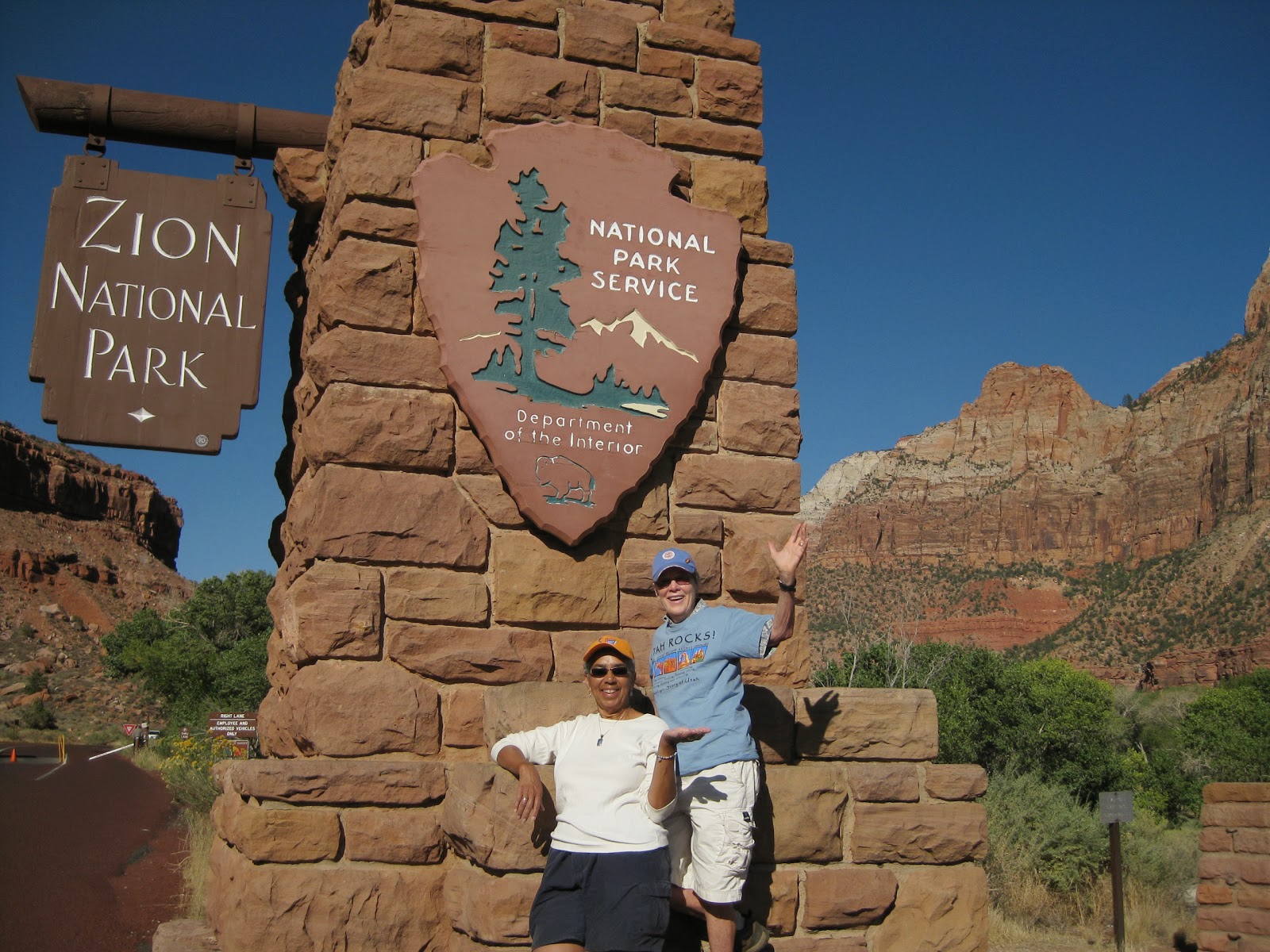 We pulled over for a photo shoot at the park entrance sign, then made our way to the Visitors’ Center to learn about visiting and hiking in the park. No cars are allowed on the scenic drive from March to November, so we would need to take the shuttle and hop off at different stops along the route. Buses ran frequently, and we had the freedom to see the sights and to take photographs as much as we wanted.

Our strategy was to take the shuttle to the furthest stop, the Temple of Sinawava, and see what we could there. Then we would make the trip back, taking the shuttle or hiking to the next stop. That let us see a good deal of the park, get some exercise, and soak up the grandeur of Zion. 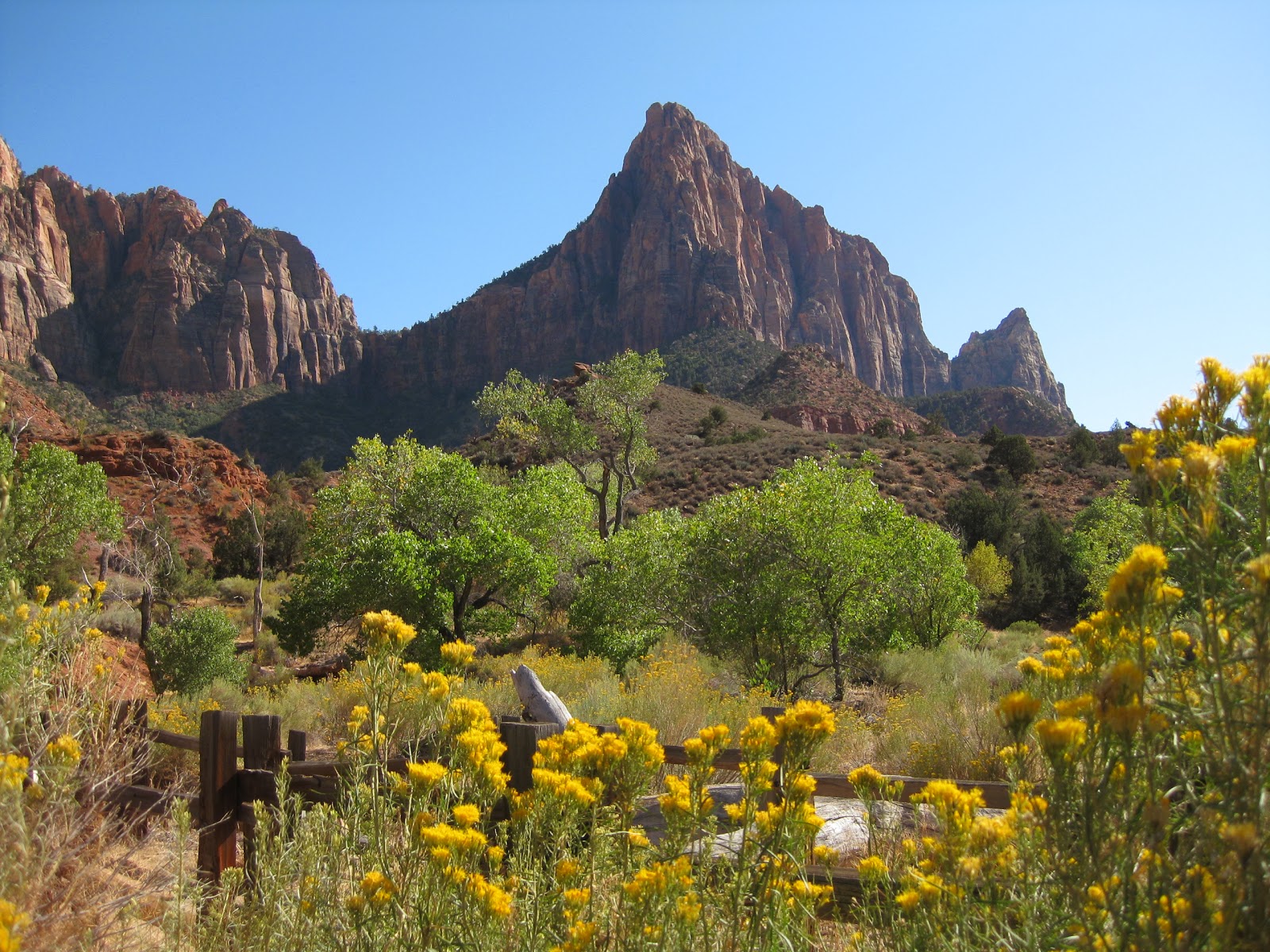 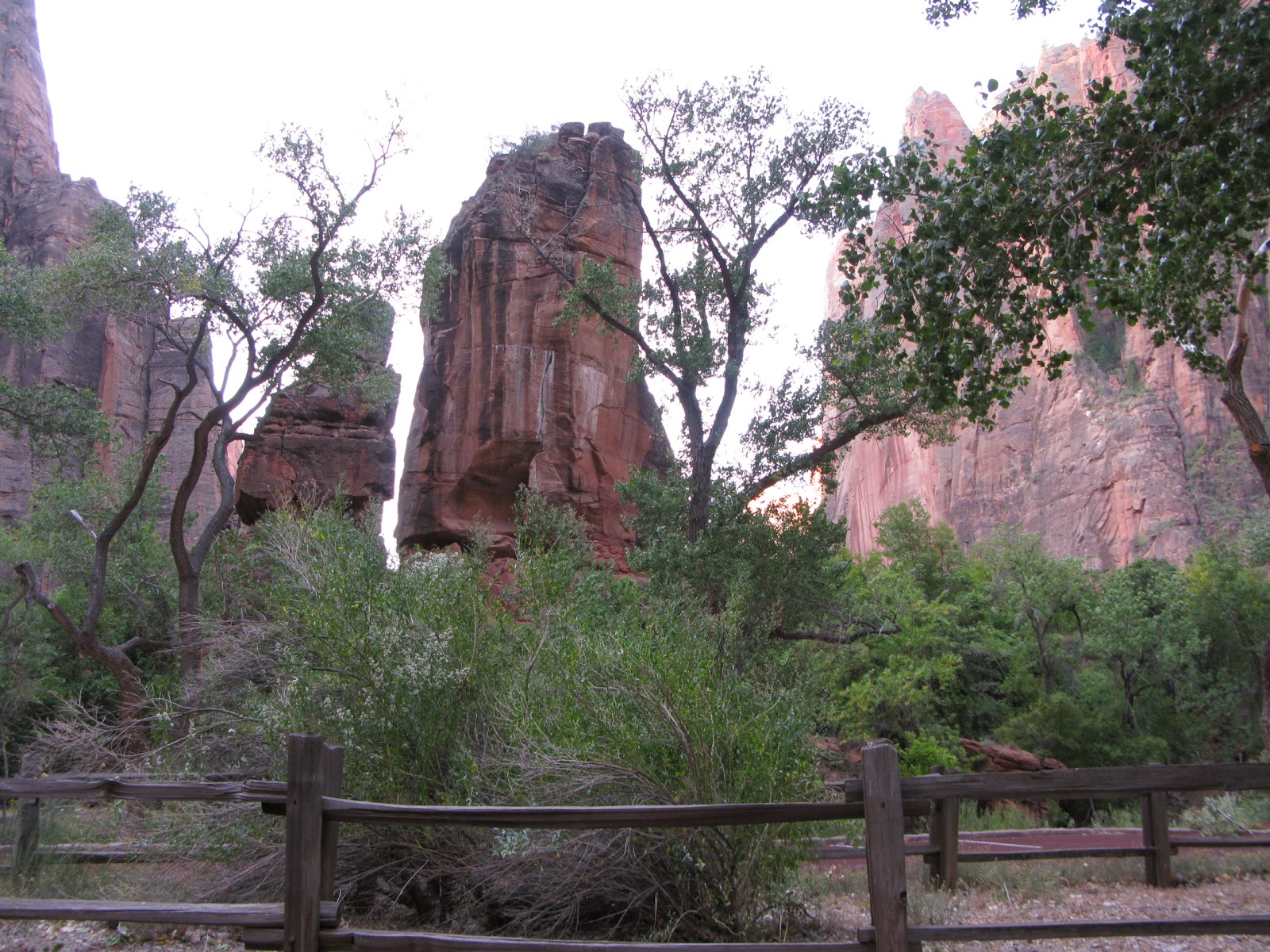 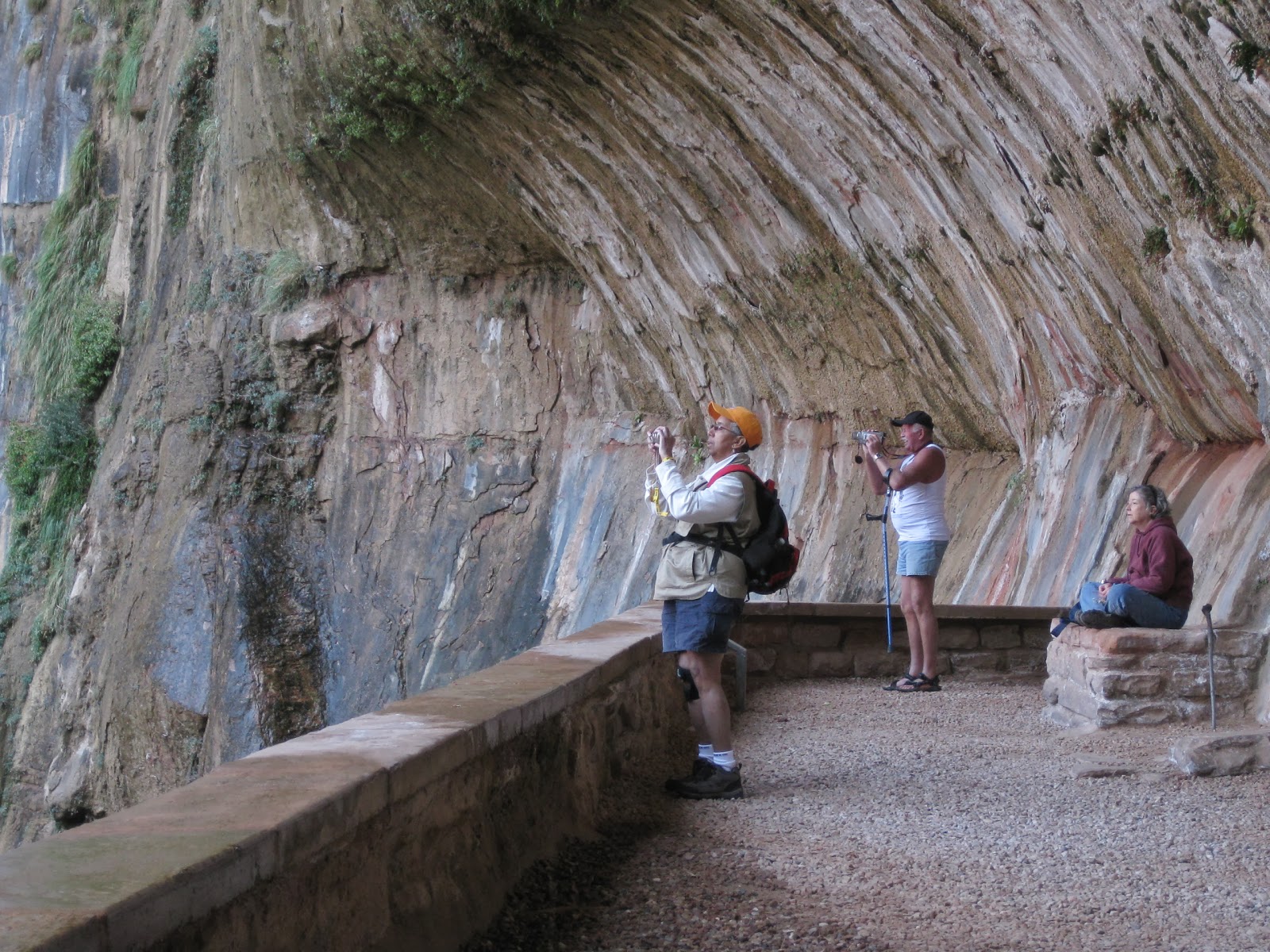 One favorite spot was Weeping Rock, a popular park feature with a trail that ascends to a rock alcove with dripping springs and hanging gardens. Part of the trail had been closed in September after a rock slide made it unsafe. It had reopened, but from the shuttle stop, we and our fellow nature lovers could make the 98-foot climb. 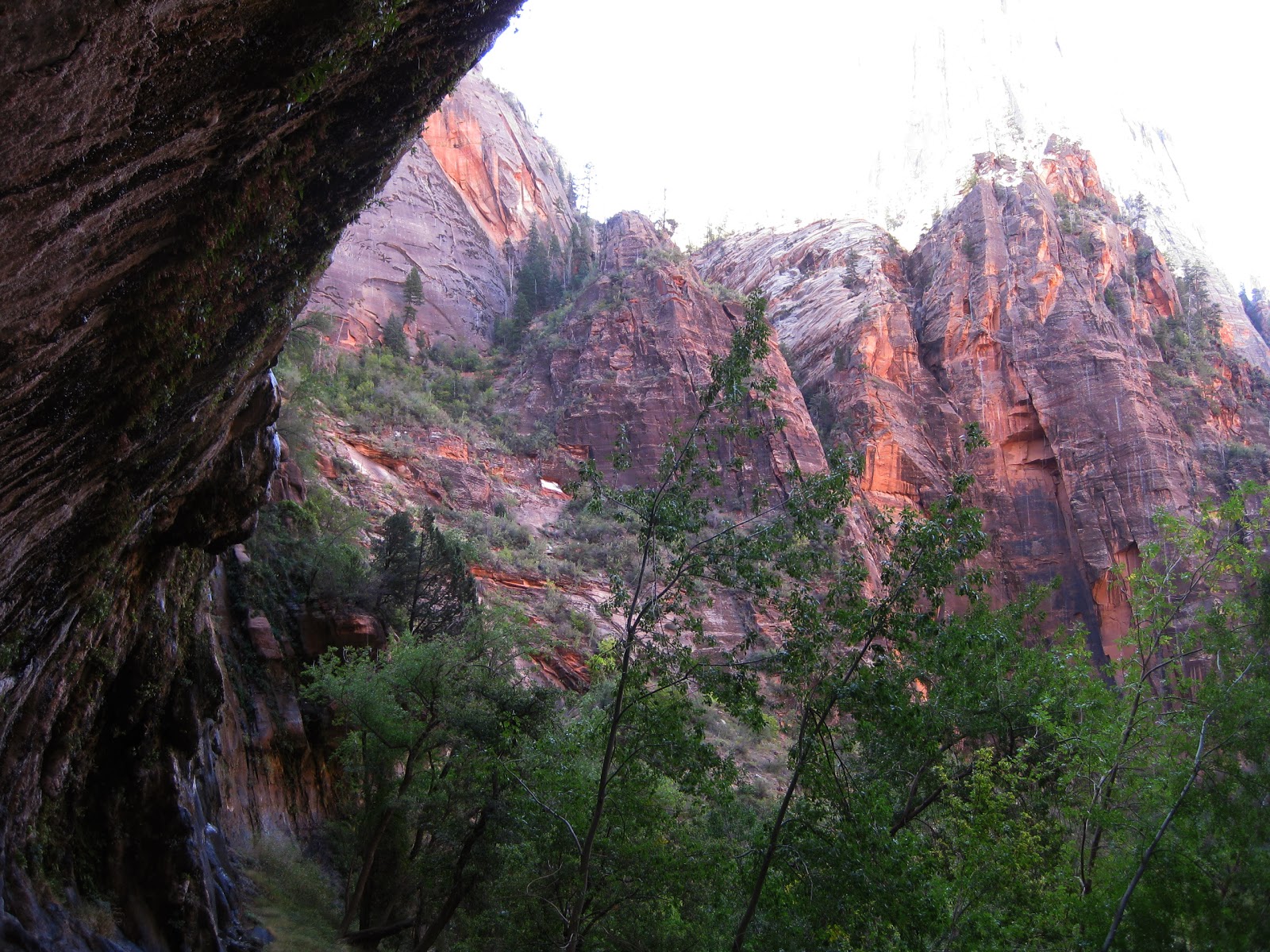 As wondrous as is Mother Nature’s role is making Zion National Park, I also have to salute the visionary first National Parks Service Director, Stephen T. Mather. He set out to develop visitor access to the natural wonders of the national park system. With Mather’s promotion and dedication, by 1930 hard-working engineering and construction crews had built the Zion-Mt. Carmel Highway and Tunnel, making Zion, Bryce Canyon, and the Grand Canyon accessible by automobile.

The 25-mile road was a joint effort between the National Park Service, the state of Utah, and the Bureau of Public Roads. Most challenging was creating the 1.1-mile long tunnel that would connect the new road from the east with the winding road to the west. The tunnel would have to be carved through the heart of the sandstone cliffs. This remarkable feat of engineering and construction is now listed in the National Register of Historic Places.  In 2012, the American Society of Civil Engineers named the road and Tunnel a Historic Civil Engineering Landmark.

Though we spent only a day and a half in Zion, it was a fitting intro to the variety of Utah landforms and national parks. Navigating the Zion-Mt. Carmel Highway and passing through the magnificent Tunnel were part of the magic.
~ xoA ~

Y is for Ypsilanti 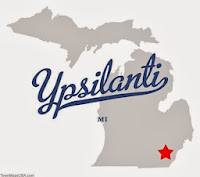 One-half day on the Eastern Michigan University campus in Ypsilanti in 1960, and I knew I was “at home.” A Saturday field trip, arranged for a group of seniors by our high school counselor, introduced me and hundreds of other prospective students to EMU and Ypsilanti. The drama department put on a play, and student leaders took us on a campus tour. Soon afterward, I submitted my application for admission to EMU, the first teachers college west of the Alleghenies.

Settled as Woodruff’s Grove in 1823, Ypsilanti is the second oldest town in Michigan. Six years later the township was organized. Ypsilanti sits on Michigan Avenue, a much-traveled route that runs east to Detroit, about 35 miles, or west to Chicago.

According to The Story of Ypsilanti by Harvey Colburn, the government commissioned a surveyor to “establish a practicable route from Detroit to Chicago.” He and his party followed an old Native trail and stopped at the Huron Valley, where the trail intersected with the Huron River. The surveyor and his crew determined that it would likely be the spot where a community could thrive.

City founders, three Detroit “enterprisers,” named the town for Greek war hero Demetrius Ypsilanti in 1929. They admired him for his role in the fight for Greek independence. Today, a statue of Demetrius Ypsilanti, flanked by the flags of Greece and the United States stands at the foot of the landmark Water Tower, on the edge of the EMU campus. 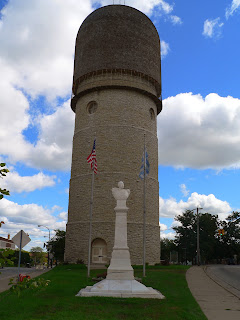 As a student, the university offered everything I needed, both academically and socially, that first semester in the dorm. But, during the years I lived in married student housing, my world expanded to include more of Ypsilanti proper. For shopping, banking, employment, and restaurants, we ventured into town.

We could walk to just about anywhere, which was great since we didn’t own a car for the first year. My husband rode the Greyhound bus into Detroit each day for work. On grocery day, I would hike from our apartment on campus to the bus station to meet him. From there, we’d walk to the store, do the shopping, and get ourselves and the bags home by taxi.

Ann Arbor, down the road six miles, served as home base for a few years. But, from 1961 to 1973, when we moved to California, Ypsilanti was our home most of the time. There, we forged friendships with other young students and worked hard at school and in our part-time jobs.  Both of us completed our schooling and moved on to jobs or to graduate programs. We became a family. Our two daughters cut their teeth and learned to walk and talk in Ypsilanti.

This is a place that fostered new learning and produced many memories during my late teens and twenties. Ypsilanti, where my life as an adult began.

Posted by Annis Cassells at 7:25 AM 3 comments:

X is for Xi’an


Xi'an (she-ANN), which means "to guard peace in the west" is considered to be the "cradle of ancient Chinese Civilization." One of the four oldest cities in China, it served as the capital for eleven dynasties. Xi'an is a mixture of the old and new and is a leading cultural center with more than 30 universities. There is much to see in this ancient city, which was the starting point of the Silk Road and one of the stops on our 2002 tour of China. 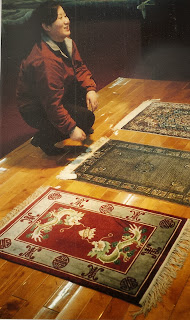 At one industrial building, we viewed silk carpets being produced. We’d seen expensive silk carpets at home, but once we saw the complex, labor-intensive process and the time and skill that are needed to make them, we understood the costs.

A huge space with a large loom strung with silk threads served as the carpet center. Four young women sat on a bench in front of it, creating an intricately-patterned silk masterpiece. Working in concert, fingers flying, they tied 300 knots per square inch. Our guide told us that this 6x9' carpet would take one year to finish.

The main highlight of Xi'an was the famous 2,200 year-old Terra Cotta Army. The site was accidentally discovered in 1974 by farmers drilling wells, in search of water.

During the reign of Qin Shi Huang, China's first Emperor, he authorized the building of his mausoleum. To avoid sacrificing live soldiers, whom he needed to guard him and his territory, he chose to construct a full army of terra cotta warriors to be buried with him to guard his tomb in the afterlife. Over the years since its discovery, more than 10,000 warriors and horses have been found. All were broken, but we saw over 1,000 restored (reconstructed) life-sized terra cotta sculptures. 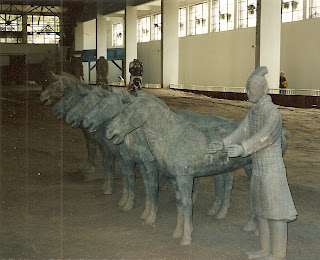 With the excavation and opening of three pits, the warriors have been exposed to air and pollutants. When some of the warriors were found, they still had brightly painted uniforms and flesh-colored faces; however, most of this paint has faded to the color of clay. Archaeologists came to realize that new techniques needed to be developed to help preserve the terra cotta soldiers and other treasures found within the burial site. 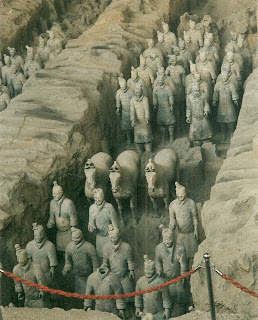 Unlike any museum we've ever seen, visitors walk and stand a few feet above, looking down on row upon row of the terra cotta warriors that stand or kneel to face possible intruders. The Chinese took only nine months to build the huge roofs, walls, and walkways surrounding each of the three pits that had been opened. 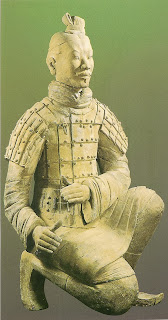 Archers with hands positioned as if holding their bows; cavalrymen sporting leather hats, short stone armor, and boots; common soldiers, so denoted by their top knots on the right side; officers, wearing flat hats; and generals, wearing 'winged' hats and long coats filled the pits.

Each face was individually carved with great detail and different facial features and expressions. Terra cotta horses and remnants of actual chariots, such as wheels and bronze pieces, were also discovered among the figures.

It was an eerie, overwhelming experience to see and be among these soldiers. 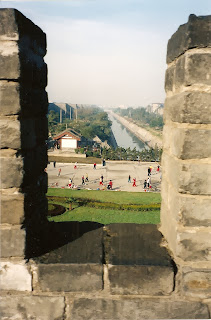 Before bidding farewell to Xi’an, we stopped at the Ancient City wall.  The well-preserved wall was re-constructed in the 14th century during the early Ming Dynasty. High above the traffic and the morning activities, we got a bird’s-eye view of Xi’an.