The significance of yesterday’s date, March 14, didn’t register with me until mid-morning, when I wrote it on the sign-in sheet at the writing workshop I’d be conducting at the Art & Spirituality Center in Bakersfield.

Then it struck me: it was the 47th anniversary of my father’s death. I stopped and drew in a breath, saw Dad’s face, and thanked The Universe for having had him.

I haven’t written a lot about Dad. But that doesn’t mean I don’t carry him with me every day. At certain times, I see him in the mirror. And I know I hold many of his values and qualities in my behavior and in my heart, like curiosity and reverence for knowledge.

Born in the early part of the 20th century, Dad’s eighth-grade education was typical in rural Ohio. He often told us kids, “Your mom is the educated one in the family. She finished high school.” But he educated himself in adulthood. In the late 1950s, he came into Islam and studied the Koran and Arabic. He read about the power of positive thinking, studied yoga, meditation, and the healing properties of herbal remedies.

As youngsters, we three kids cringed over his vegetable juicing and distasteful concoctions. One memory that stands out is of us, if we needed to cough, burying our faces in the coats in the front hall closet so he wouldn’t hear us and prescribe the cough medicine he’d made.

Dad’s interest in yoga led him to teach classes in the evening recreation program at our local elementary school in Detroit. My brother Thomas and I were out of the house by then, but Dad would practice at home and get my sister Reenié, who was a young teen, to try the postures, too.

Saturday nights, their kitchen filled with smells of Mama’s lentil soup and the sounds of a group of young neighborhood men holding profound conversations around our table. For several years, as they lapped up Dad’s wisdom and mentoring along with Mama’s soup, these men became like brothers, and we all felt a deep loss at Dad’s death.

He left us way, too soon—I wasn’t yet thirty when Dad died. But he left us with lots of memories of him, his favorite phrases, and his corny jokes. And, a legacy of love, honesty, pride, and determination—exactly what we’d need to become successful adults.

When a Promise Becomes a Reality 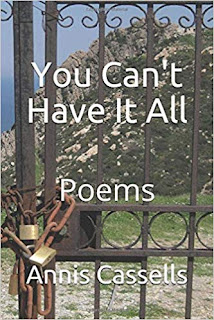 Excitement built when the proof copies of my book arrived at my daughter and son-in-love’s address in Washington, D.C. With Asila and David, Judy, and friend Michelle as my first audience, I read aloud. I found a few things I wanted to change during the proofreading phase—spacing, words to be added or eliminated, and resizing the cover fonts.

Then I pressed the “Publish” button. In that exquisite moment, my shoulders dropped from my ears and an audible breath released from my lips. My book was on its way. Within 24 hours, Amazon notified me it was live on their site. Just in time for the Writers of Kern Spring Conference and National Poetry Month (aka April), my book is a reality.

You Can’t Have It All: Poems is a collection of poems written over a number of years. It includes poems of memories, feelings, reflections, and observations as well as poems based on ideas and stories from conversations with others, and “poemoirs,” memoirs in poetic form.

A collection like this doesn’t happen without help, encouragement, and input from others, and I am so grateful to all who supported my writing—Judy, my family, friends, Writers of Kern critique group, writing groups, and even folks I’ve never met who commented on the poems I shared online.

From the overwhelming, positive response the book is receiving, I am buoyed, appreciative, and humbled. And curious. I’m curious about which poem(s) resonate with people, what strikes them and why. If you’d like to share, I’d love to hear from you.