F is for Farmstay in Fiordland


One delight that we’ve had on tours all over the world has been getting an “insider’s view” of the country by having a home-cooked meal in private homes. On the New Zealand motorcycle tour we took in February of 2000, it went a step further. For two nights, we stayed at a farm out of Te Anau in Fiordland. This would be our “home base” for the next day’s excursion to Milford Sound.

Many farms in New Zealand produce sheep, while others raise combinations of cattle, deer, horses, and sheep.  Five of us, Judy and I, our friend Donna from Michigan, and two men from Minnesota, were assigned to the 875-acre sheep farm of Don and Dorothy Cromb.  After a sumptuous lunch at Lammerview Orchard, we found our destination with no trouble and entered the property via the long gravel driveway.

Our hosts, the Crombs, provided us with a warm and homey place to stay and interesting conversations.  Fellow biker Donna was especially interested in the workings of the sheep farm since she and her husband farmed in Michigan.

Dorothy Cromb was a real "farm wife.”  She fed us breakfast, including her homemade muesili , and prepared two delicious 3-course dinners for us. She tended to the details on-call to help with the bailing.  My thought about Dorothy was “Whatta Woman!”

“We enjoy having groups come,” Don said. “We can’t leave to go travel the world, so this way the world comes to us.” 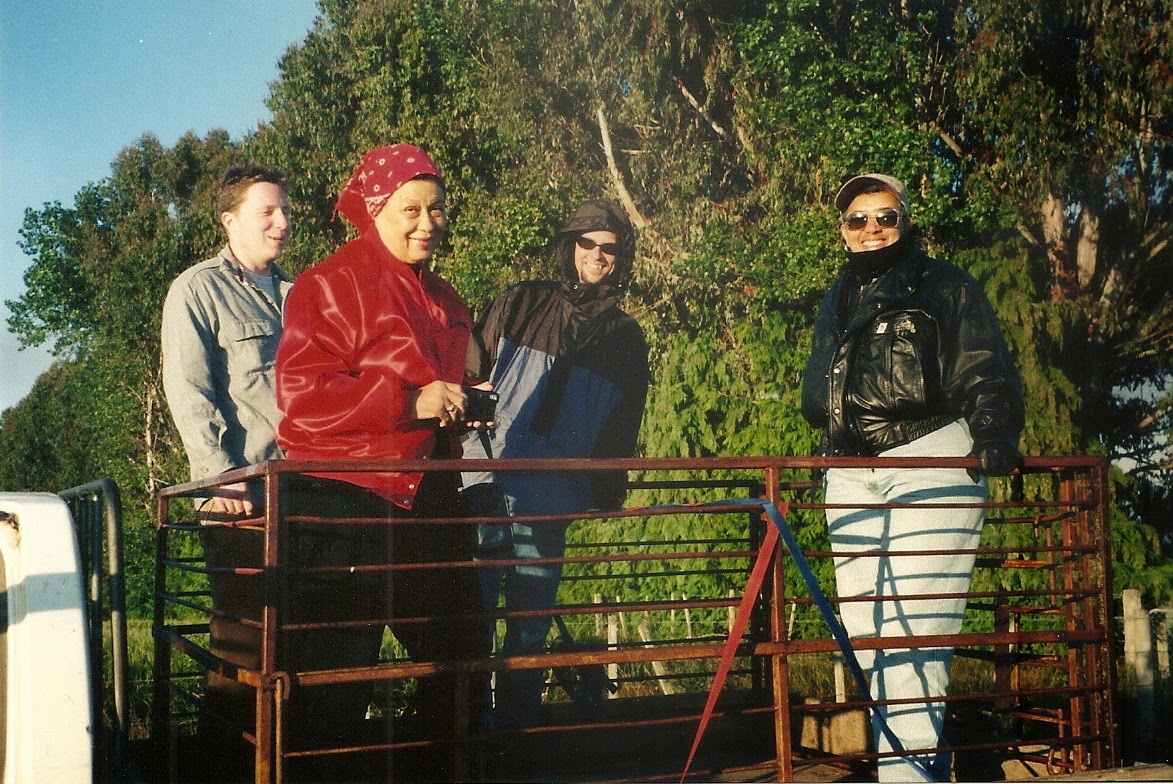 The second morning, before our departure, all of us bikers climbed into the back of Don’s pick-up. While Dorothy stripped the beds, did the laundry, and made ready for the next group, Don drove us around the farm for a tour. We all enjoyed seeing the place, and Donna had a lot of questions and made observations that enhanced the farm tour for the rest of us.

That day we rode out with an appreciation of New Zealand farm life and something tourists rarely experience: a chance to know how the real people in another country live. And, tucked away, we had the recipe for Dorothy’s muesili, which Judy made for us several times after we were back home.
~ xoA ~
Posted by Annis Cassells at 7:44 PM 8 comments: Links to this post

E is for Elements


Besides the usual road hazards motorcyclists face, we are also at the mercy of the elements. This week, heading down to Bakersfield from the Oregon Coast, 755 miles, I rode through fog, rain, and fire-charred areas of California. (Other years, I’ve passed through areas where the firefighters are still shoveling over smoking embers.)

The wind buffeted me and Big Red head on. The sun shone smack dab in my eyes on curvy Highway 42 from Coquille to I-5. The elements will always present a challenge.

Gliding along about 8 AM, enjoying the view to my right, I saw the variegated green pastures with rising fog puffs, and marveled at nature’s beauty. Then I rode into fog-filtered direct sunlight that penetrated my orange high-definition face shield and momentarily erased my view of the road and its markings. I slowed then raised my left hand to block the sun long enough to move out of its blinding rays. Whew! Then I could grasp both handle bars and come back up to speed.

Along I-5, the intermittent rains pelted us for miles. At one point, we stopped in Mt. Shasta City for a weather-and-lunch break. From our booth in the Black Bear Diner, Judy and I watched the sky clear and the sun come out and retreat several times before we paid our check and made ready to continue.

A motorcyclist prepares for the elements by carrying gear for almost any situation. The older couple who sat in the window booth watching as I donned my rain suit over my motorcycle jacket and heavy-duty jeans made me smile as I imagined their surprise at how long it took me to suit up. I waved to them as I backed out, and they returned the wave, as if we were friends.

In case of extreme heat, there are cooling vests and neckerchiefs. Soak those babies in cold water, and the gel beads inside expand and help one’s body keep cool for awhile. When temperatures are cold, many of us have electric vests and gloves, and some bikes are equipped with warmers in the hand grips.

Thanks to my friend Trudy, I am never without an umbrella. “It’s your shade if you’re stranded on the side of the road in the heat,” she said. It’s also been my protection from plummeting hailstones after pulling over onto the shoulder of a New Mexico highway in a sudden hailstorm.

We fight the elements, usually enduring and sometimes beating them.  It’s all part of the motorcycling reality and experience. It’s the stuff of our stories.

Posted by Annis Cassells at 8:02 PM 8 comments: Links to this post

D is for Downtown Coos Bay


Today’s blog is a departure from the series of motorcycle stories.

Judy and I met up with our friend Laurie Saturday morning as we and hundreds of others gathered in downtown Coos Bay for the start of the 35th annual Prefontaine Memorial Run. It was already hot in this little coastal town.

It was Laurie’s 34th consecutive year to run. Now, that deserves a trophy right there.

“Well, are you ready?” she asked, pink hat in hand and a smile on her face.


“Sure,” I said. “I’ve got my chewing gum and my orthotics. My toe spacers are in place, and I’m wearing my knee compression sleeve.”  Dang, I thought, I forgot to take my ibuprofen!

The two-mile “Fun Walk” (up and down a hilly downtown course, I might add) was my event. Laurie and Judy would participate in the 10K run/walk that retraced hometown track star Steve Prefontaine’s training route.


We met up with our buddies in front of the Coos Bay Art Museum for our usual pre-race photo shoot. Many of them had trained the last ten weeks at Downtown Health & Fitness, our friendly combination social club and fitness center. I could feel the energy as they moved around, and I listened to their talk.

“I’m going to jog more this year,” one said as she walked back and forth.


“I just want to finish and be upright,” came from another. 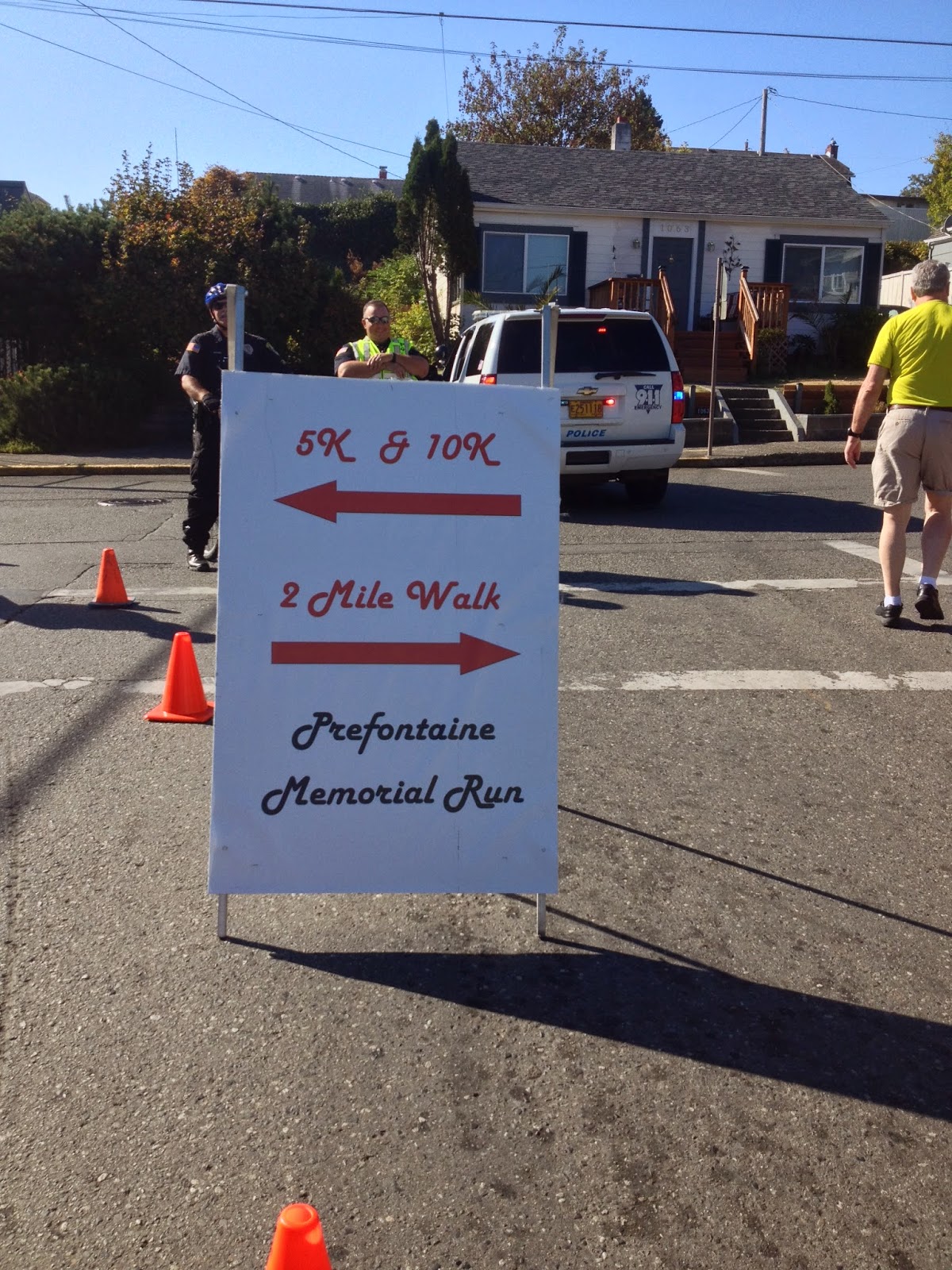 Steve Prefontaine’s sister squeezed the starter gun’s trigger to begin the race, and we were off. Judy and I parted as we two-milers hung at the rear to give way to the serious 10K runners.

The sight from the back of the pack as we turned up Central Avenue was spectacular. As far as we could see, a flood of florescent yellow dotted with bright pink filled the entire roadway and climbed the hill toward where the street curved. It was like a lava flow in reverse.

As I made the turn onto 11th, which leads into the Marshfield High stadium, it was lined with people of all ages urging all of us on. And in the stadium bleachers, more friends waited to cheer as we crossed the finish line.

I rested a bit then waited near the finish line to try to get photos of our friends as they came in. 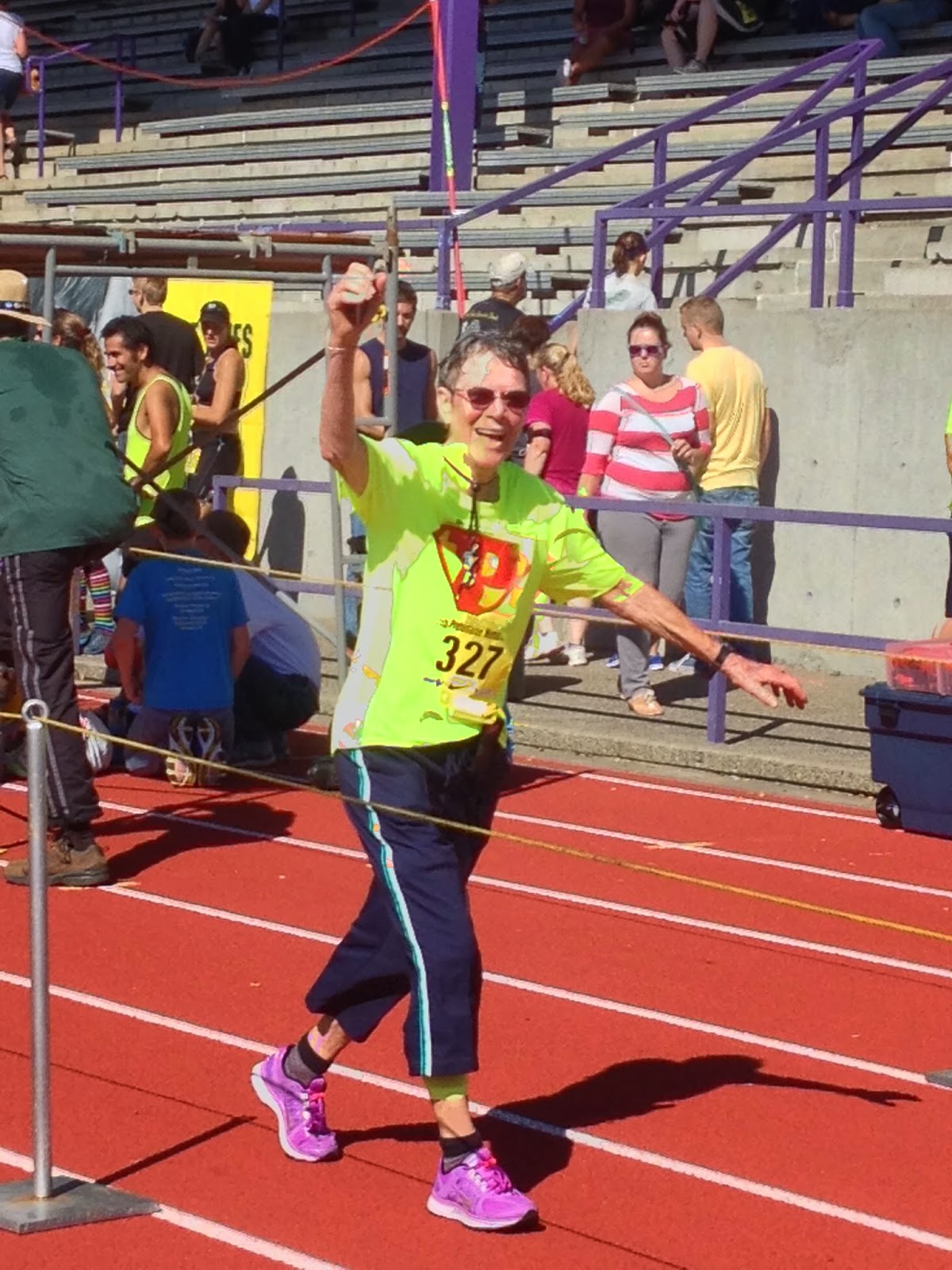 Laurie was with me as we watched for Judy to come in. Red-faced and drenched from sweat and water that kind bystanders sprayed on the runners as they passed, Judy jogged down the stretch and into the chute. 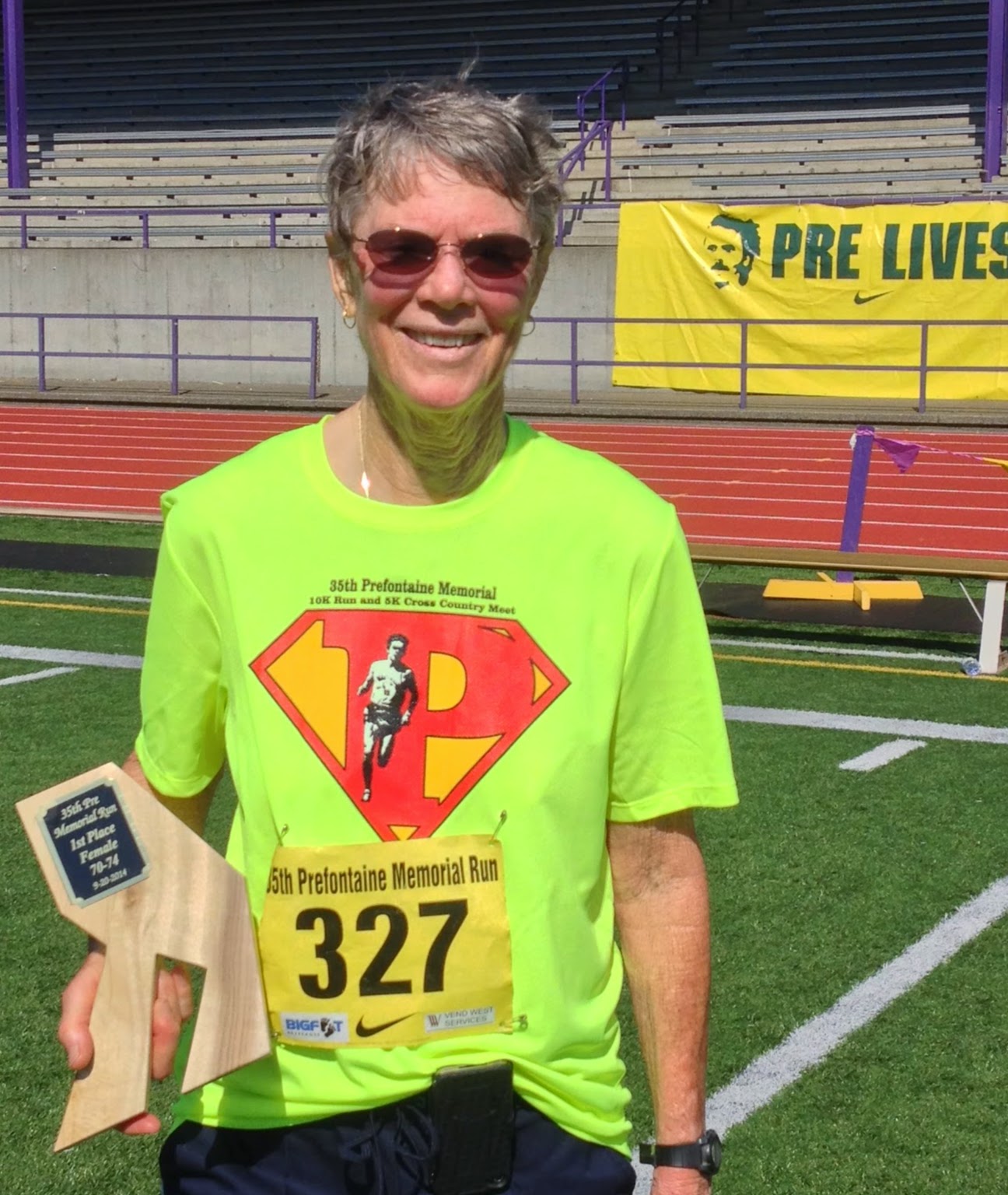 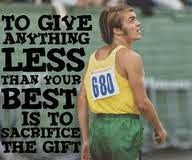 Downtown Coos Bay -- where the Prefontaine is followed by a big parade with marching bands, an evening rolling car show, and a sock hop. All part of the Bay Area Fun Festival.

C is for Chapel Hill 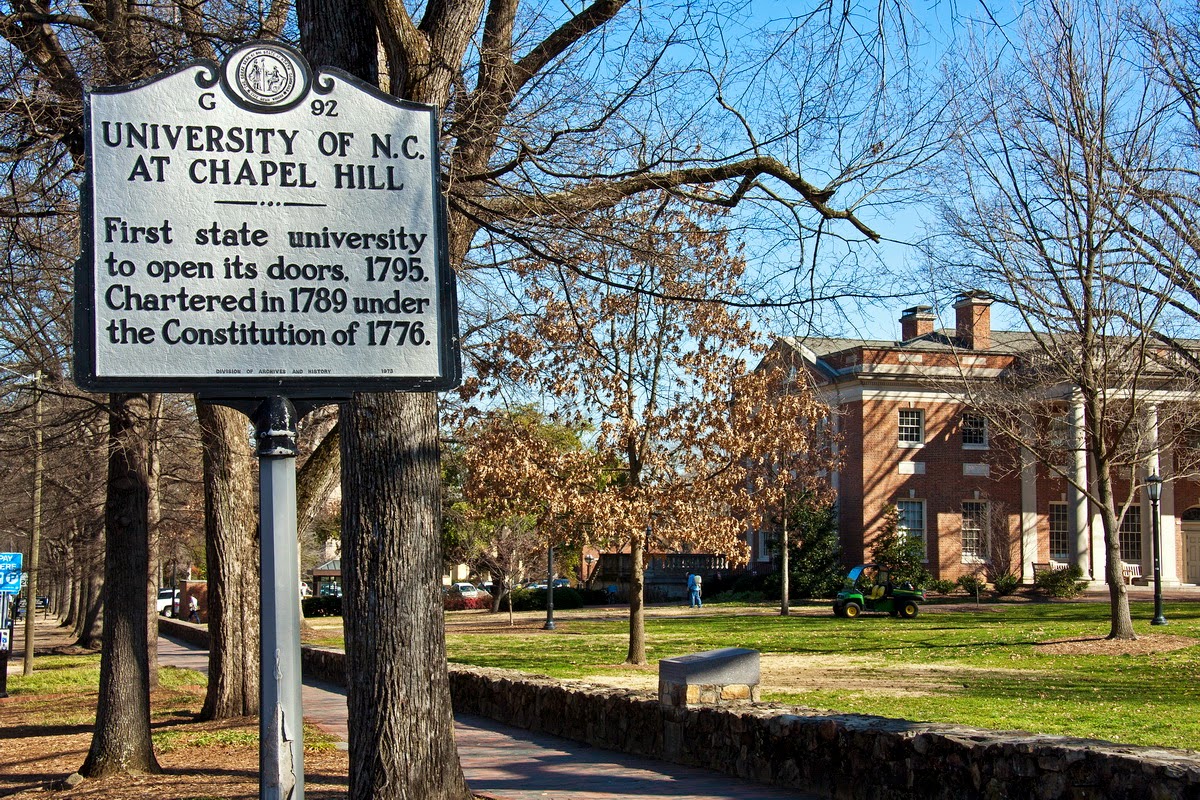 Asila and David were newly engaged, and it was on this visit that I would meet his parents, Eileen and Steve, for the first time. I wanted everything to be just right. At home, I decided on the dress, shoes and jewelry I’d wear the evening we were going to dinner at the restaurant where David had proposed.

Packing space was even more limited in Big Red’s saddlebags because I anticipated passengers on several legs of my journey.  I would be taking my extra helmet in one saddlebag. So, I mailed my dinner clothes before leaving home and hoped they would get there by the time I arrived.

Steve and Eileen were both educators, so with common careers, interests, and family values -- and loving each others’ child -- we had much to discuss. During one conversation, they had a number of questions about me and motorcycling. When they said they wanted to have a ride, I saw in their faces that they meant it. “Sure, we can do that,” I said.

Pride swelled in my heart, but so did humility and a bit of trepidation. I felt honored that they trusted me enough to want to climb on Big Red and take a spin. But it is a huge responsibility to have someone else’s lives in your care while riding a thousand pounds of machinery running on two 4-inch patches of rubber.

Between all of us, we were able to outfit Steve and Eileen with appropriate riding gear. It was hot and muggy, but we all wore long pants, long sleeves, closed-toed shoes, and gloves. My size Medium helmet worked, though Eileen’s short-cropped hair didn’t take all the head room. And as for Steve? The helmet fit extra snug, and we practically had to pry it off him.

One after another, I gave them passenger instructions, “Mount from the left, put your foot here, sit easy in the saddle, and just go with the bike.” Then we struck out on the nearby route David suggested. It was perfect, not too long and with a few curves and turns.

As I steered Big Red onto the roadway, with treasured cargo seated behind me, I thought, I have my future in-law on this bike. Oh Lord, don’t let anything happen to them. But I proceeded as if it were an everyday occurrence. We talked and they sat back and enjoyed the ride while we communicated over the intercom system. And at the dinner party? We enjoyed the superb restaurant, with its fine food and delightful ambience, and another evening of thoughtful conversation. It was fun to listen as our kids retold the story of the night they became engaged and to see the spot where the waiter had presented the desserts, among which was the diamond David had chosen for Asila.

This precious time together in Chapel Hill built a mutual respect among us parents and began the blending of our families.