It was days after Newtown before I could sit down to write. When I did, what evolved became a poem. So I offer it here, along with a hopeful prayer written by Katherine Hafeli Scheler.

My heart aches for the people of Newtown.
I shake my head in disbelief.
Another disaster burnt into memory
Forever recalling
Where, when, how
We heard the news

Maybe, by now
We do comprehend.
No longer can we bear
To live in fear
Explain the unspeakable
Console each other in grief
Merely talk about change

Maybe, by now
We get it that
Time with loved ones
Real conversations
Genuine caring for
And taking care of
Each other
Doing something
Make the difference.

"Let today be guided by a fair wind, let us sail on an even keel, and let the hearts of men be overwhelmed with peace as we bear the burdens of our brothers and prepare to do our part in healing the ills of our world."
~ Katherine Hafeli Scheler

Our recent trip to Switzerland put Judy and me in touch with many fine folks. Some were native Swiss. Others had emigrated to this beautiful land. Some were passing through. 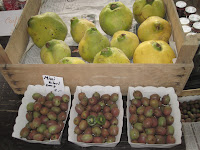 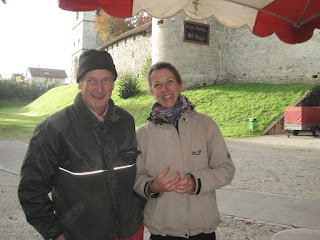 Murten was a village that we enjoyed so much after making a day trip there, we decided to return later and make it our home base. On that first Saturday, we came upon Martin, a farmer with a stand at the Farmers’ Market. After we’d admired his pears, he asked us in English if we’d ever tasted mini-kiwis and gave us samples of the tasty little fruit.


After purchasing some kiwis, we continued our conversation with Martin; he wanted to know where we were from. Then, in addition to telling us about his trips to the United States, he gave us a history of Murten and a nearby village that had been a Roman capital. We mentioned that we liked the area and would enjoy coming back. That’s when he was kind enough to find out about reasonably-priced hotels in a town where another vendor lived and come back to us with the name of a possible place.

We bid Martin and his wife goodbye, but that wasn’t the last that we saw of him. After our pastry and hot chocolate stop in a village tea room, we came across Martin, this time walking on the street. As if he’d known us a long time, he introduced us to a lady who’d been walking with him. She had grown up in Murten and told us about her family and youthful years there. 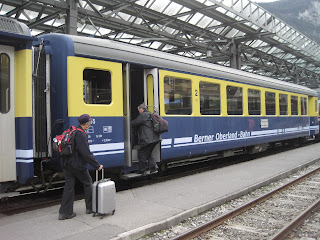 We rode the trains every day, which provided many opportunities to meet interesting people. Before the trip, we had no idea that we would come upon such diversity in Switzerland. The 19-year-old Russian woman whom we met at the train station in Gruyeres was studying in Switzerland for her ninth year. The couple from The Domincan Republic who had moved to Vevey, where the wife was an executive for the Nestlé Corporation.  A businessman in Neuchatel, seeing us consulting our guide book and maps, stopped and directed us from the train station to the old town so we could find the Tourist Information Center by the lake. 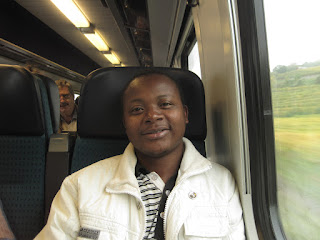 Oswald from Cameroon was our seatmate on the train from Lausanne when we returned to Murten. He’d lived in Spain for eight years and had recently come to Lausanne to take an electrician course in hopes of getting a better job. When we introduced ourselves, a huge grin broke out on his face, and he looked at Judy and said, “My sister’s name.”  In perfect English, he told us about growing up in Cameroon, a bilingual country where English is spoken. Oswald told us about his family, scattered over three continents, that includes a daughter who had just celebrated her first birthday. It was priceless when he reached for his phone to show us a picture of her.

One of our day trips was to Leysin, a mountain village that is also the home of the Swiss Hotel Management School. A charismatic young man behind the counter of the student-run coffee shop asked, “How you want it, I can make you anything!” As it turned out, Hans Christian Benvenuto, from Indonesia, made and served us a perfect, creamy, blended, chocolaty, iced coffee that was topped with a generous swirl of whipped cream. It was, indeed, just the way we like it. He has a perfect persona for his chosen vocation in hospitality and delighted us with his poise and conversation. When I asked about the origin of his name, he said, “I’m a mixture of everything.” 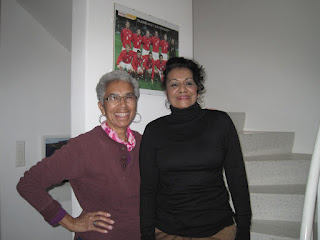 Mali Freidli runs a bed and breakfast in her lovely home in Murten, just five minutes’ walk from the train station. We landed on her doorstep after heavy paint and varnish smells in the hotel we’d booked sent us looking for other accommodations. One glance at her bright, light, spacious guest room with a patio, and we knew we’d scored. Our first night with her, she and I visited over tea. An Indian woman born in South Africa, Mali lived through Apartheid and returned home to rejoice and celebrate Nelson Mandela’s release from prison. This exuberant, gracious woman changed our stay from ‘miserable’ to ‘delightful.’

Judy and I are grateful for every person whom we encountered, every conversation, every lesson; every opportunity to bring the world inside our lives. We may look the same as when we left, but we are forever changed. 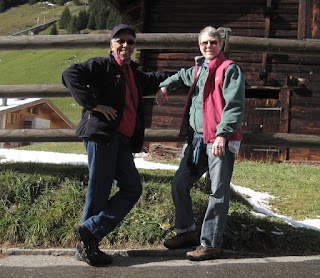 Our recent trip to Switzerland brought us many new contacts that, though brief, enhanced our travel experience, taught us new things, and reminded us that we are citizens of the world.

Soon after we arrived in the Alpine resort of Murren, two other women from the U.S. showed up at Chalet Fontana, where we were booked for three nights. Teri from Minnesota and Trudy from Iowa were old college friends who were spending a week in Switzerland. We struck up a conversation that led to a snowy hike down to Gimmelwald and lunch together. Eager to learn what we’d seen and done in the area, we visited over drinks and dinner on the second evening.

Getting tips and recommendations is a fascinating benefit when there’s an opportunity for chatting with fellow travelers. An Aussie couple from Sidney had also booked at Chalet Fontana. He had graduated from University of Sidney, and she had her student teaching to complete. They gave us information about LateRooms.com, and we would use it later in our trip when we booked lodging in Montreux.

Alex, a young man on the train from Interlaken Ost to Lauterbrunnen, introduced us to Trammelbach Falle. He asked if we knew of it and how long it would take to walk to it from the train station. We didn’t, but later that day our guest house owner told us about it and gave us a discount coupon for this marvelous natural attraction.

Denise, the English woman who owns Chalet Fontana came to Murren to work at a ski resort. She hadn’t planned on staying, but that was 30 years ago. For a number of years, she’s run her own guest house, providing an ideal setting for comfort and connection. She had a wealth of information about the area and hiking trails, and it was fun to get to know her at breakfast time. 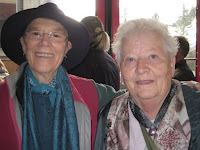 Coming down from Schilthorn on the cable car, Judy struck up a conversation with a woman who was on a family trip. We learned that she and her husband had been farmers who moved to Toronto when they could not afford to expand their land holdings in Switzerland. They come back regularly to visit family. We could really appreciate her first-hand account of their farming days since we’d hiked among the valley pastures and cows the day before on our way to Trammelbach Falle.


We met Rosemarie at our guesthouse/hostel in Vevey. For a couple of nights she fascinated us as we observed her in the common room, laughing and interacting with television programs. On the third night, we sat together at a large table and began to visit, sharing our experiences in the region. She, too, loved to hike and was fascinated by the surrounding vineyards and castles.

Rosemarie was vacationing alone, having traveled by train from her home in Germany. A retired nurse, she found that she could spend much less for lodging by staying in hostels and could then afford to travel to interesting places for longer periods of time. Another thing we had in common with her. The morning we were all ready to check out, we visited over breakfast before she headed for home (a nine-hour train trip) and we just moved to the next town on Lake Geneva.

Though brief, these encounters gave us a glimpse into people’s lives and cultures, created connections, and enhanced our travels. And for that, we are grateful.

Posted by Annis Cassells at 7:17 AM 4 comments: