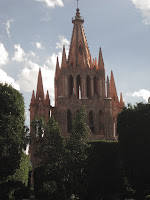 February brought Judy and me back to San Miguel de Allende. This time, our Bakersfield friend Dennis traveled along with us. We’re living in our same apartment complex on Animas; Judy and I on the ground level in the Ricardo Montalban, and Dennis above us in the Dolores del Rio.

It was Constitution Day weekend, and we’d heard that the Navy Band would perform. But, checking further, we discovered that instead, a high school symphony group would be playing in a park “just a couple blocks behind la Parroquia.” We’d started out around the west end of, la Parroquia, San Miguel’s most famous edificio, when sounds of an exuberant band erupted in the opposite direction. 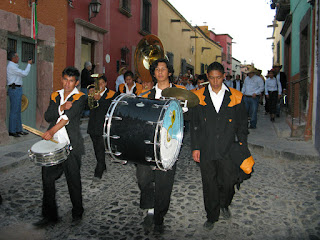 A quick turn-about, and we were on the trail, a block or two behind the black-and-orange-costumed musicians and a crowd of revelers whose cowboy hats topped off their western garb. Even from a distance, we could see that they were doing a dance march as they followed the band, Pied-Piper like.

Thanks to traffic bottlenecks, we soon caught up to them after they turned on Calle Recreo, whipping out our cameras on the run. For the next several blocks, we wove through the crowd of onlookers, everyone vying for a good photo position. 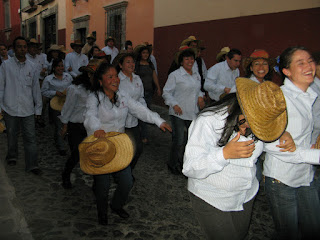 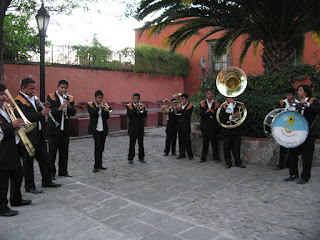 The procession stopped at the historic public lavanderias, the outdoor tubs where, in the old days, the women congregated to do their families’ wash. There, the festivities continued with music and dancing. We observed through our camera view-finders, clicking away. 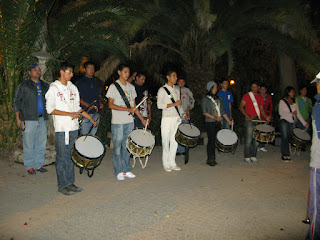 Then, we heard strains of a different type of music coming from the direction el Parque Benito Juarez, two blocks away. Following the sound through the park’s well-lit brick paths, we came upon a spot that opened up into a circle. There, a drum and bugle corps practiced, playing with enthusiasm and precision. A group of young men and women, encouraged by their spirited leader, entertained us for several minutes before we moved on in search of the orchestral group we’d expected to hear this night.

Further into el Parque Juarez, and through paths that wound past the many flower vendors still in place from the Feria de la Candelaria, we picked up the sounds of violins coming from the center court. There on the stage, sawing away, sat 15 or 20 youthful violinists and their teacher, with an accompanist at the piano. We’d arrived in time to hear only the last two numbers of the evening before they abruptly held their bows at attention, stood bathed in the light and applause, then marched off the stage. 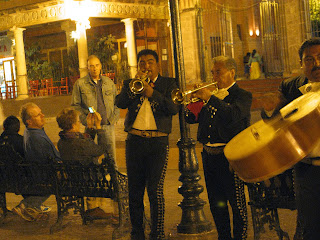 Later, we passed through el jardin on our way home and came upon mariachis serenading a group, who had prime seating on the wrought iron benches facing la Parroquia. Some of the on-lookers sang word-for-word, note-for-note, with the musicians. Some danced or pulled others’ hands, urging them to rise and move with the music.

Enchanted by this entire scene -- the voices, the crowd, the music, the view -- and the melodic variety the evening held, we couldn’t help but marvel at the magic of San Miguel.