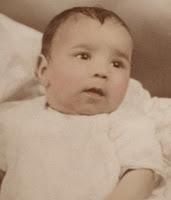 I decided to appear on the planet smack-dab in the middle of World War II. It was the summer of 1943 in Detroit, Michigan. The infamous Detroit race riots had happened a few weeks earlier. A round-faced seven-pounder with dark, pixie hair, I was the first child of Thomas and Ruth Cassells.

Dad and Mom had moved to town from Ohio, where they’d both grown up. My father was raised on a farm, the middle child of a family of 13 children. My mother, the only daughter and youngest of three, was a “city gal” from a tiny coal-mining boomtown in southern Ohio. Her family lived above her father’s barber shop.

A bustling city during war time, Detroit was wide open; automotive factories ran around-the-clock shifts and needed workers. Many from southern and rural areas migrated to this land of opportunity. Dad became employed by the city as a streetcar driver. Four of his siblings had previously moved north and settled there, so family lived nearby.

In 1943, at Wayne Diagnostic Hospital, segregation was in practice -- even in the maternity ward and nursery. The nurses apparently mistook us for white since my mom and I were fair-skinned. So, a staff member placed me in a bassinette in the section reserved for the white babies. Of course, Mom had no way to know this; newly-delivered mothers weren’t allowed to get out of bed.

When my tall, handsome, brown-skinned father came to see me for the first time, a nurse greeted him politely and showed him to the nursery window. He waited while another nurse went to fetch me from the “colored” section. Knowing my dad’s personality, I can imagine the panic when no one could locate the Cassells baby.

Finally, one nurse checked the babies across the room in the “white” section. And, there I was, happy and safe -- less than 24 hours old and already breaking the color barrier.
~ xoA ~

Posted by Annis Cassells at 10:30 PM 35 comments: Links to this post


~ A series about first-time events in my life, in response to the Writers of Kern blog challenge

My writing club, Writers of Kern, issued a month-long blog challenge that begins today. Bloggers need to post on Wednesdays and Saturdays. Part two of the test is that we read and comment on the blogs that fellow club members post.

For this challenge, I decided on the theme of “firsts.” So these next eight blogposts will be memoir pieces, some recent and some from long ago. Feel free to comment and share your memories, too.

Sitting in the stands or glued to the television, we’ve watched as presidents, mayors, and celebrities throw out the first pitch of the baseball season. I always thought Okay. Big deal. Then, I had the chance to experience what a big deal it was.

Our friend and Relay for Life captain Scottie called one day to ask if we’d show up the next Friday night for Cal State University, Bakersfield’s Relay for Life Night at Hardt Field. “They want to honor survivors, so it would be nice to have a few out there,” Scottie had said. Thinking that we’d be out there supporting Scottie as she threw out the first pitch, Judy and I agreed. We dug out our 2012 purple survivor shirts.

The chipper CSUB cheerleader captain, Lizet, greeted us. She is also the captain of the student athletes’ Relay for Life team and organized the survivor-honoring event. As a manager gathered our personal information, we discovered that things wouldn’t be exactly like we’d thought. All three of us would be on the field, simultaneously throwing baseballs to three CSUB catchers, right after the National Anthem. When is the last time I threw a baseball? I wondered. It must be nearly 40 years ago.
Lizet escorted us down to the playing field, where we met two of the coaches and the National Anthem singer. A slight breeze blew as the players, some already in their pink shirts, warmed up on the diamond and on the sidelines. Judy and Scottie tossed a ball back and forth. I just held onto one, trying to get the feel of the sphere in muscle memory. 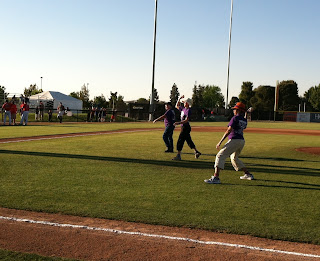 I was good until I watched my catcher squat, thus lowering my target. I prayed I could make the ball reach him. Nearly synchronized, Scottie, Judy and I drew back our arms and let our baseballs fly. Though my throw was low, my long-armed catcher snagged it and made me look good. All three of us hit our marks. Roaring applause and cheers exploded from the stands.

The catchers stood up and walked forward to congratulate us. Each one presented us with a brand new ball that had been autographed by the whole team. As we turned to leave the field, we saw all the players in a line, waiting to give us a handshake or a hug. That filled my heart. We don’t always think of college-aged sports teams and compassion in the same sentence. But, these kind young men showed us they cared. 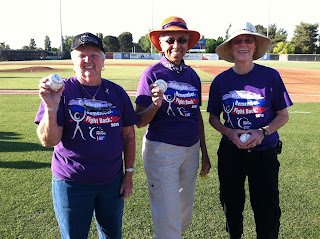 Ah, throwing out the first pitch. It was, indeed, a big deal. Thanks to the young men and women of CSUB,  I have another “first” for my memory bank.
~ xoA ~
Posted by Annis Cassells at 7:14 PM 26 comments: Links to this post

Discounting gray-haired folks doesn’t cut it, especially when we’re talking about talent. The recent first Annual Seniors Have Talent variety show in Santa Barbara demonstrated that fact. This inaugural event was sponsored by Santa Barbara’s Center for Successful Aging.
On stage at the gorgeous, historic Marjorie Luke Theatre, scores of mature adults danced, sang, and played musical instruments with the enthusiasm of contestants on America’s Got Talent. With the professional air and confidence of seasoned entertainers, they took the stage, delighting the sold-out audience and sending us down Memory Lane. Toes tapped, heads bobbed, and smiles spread wide as the 800 of us took it all in.

Sparkly costumes and precision moves hallmarked the performances of Santa Barbara Treble Clef Chorus, a Sweet Adelines choir; Girls’ Night Out, a reincarnation of the famed Andrews Sisters; and the fast-stepping women of Santa Barbara Silver Follies. The dozen-and-a-half women in the troupe, Hula Anyone, transported us across the sea to the islands with their soft, barefoot tread and swaying bodies.

A woman in her 90s flawlessly played “Chopin Nocturne in C Sharp Minor.” An 80-something woman had suffered a stroke several years before, but her singing voice was the first of her skills to return during recovery. She belted out “Climb Every Mountain” while holding the microphone with one hand and the other on her walker.