When There's a Connection

Sandy Hook, San Bernardino, Orlando, Las Vegas. These cities, obscure to some and popular to others, are now forever linked by the violence that has rained down on innocent people.

We grieve for the victims, feel for the survivors and families that are affected. We can hold them in our thoughts and prayers. But nothing –nothing – will ever be “normal” again. Not for them. Not for us.

For me, living in Bakersfield, a four-hour drive from Las Vegas, has meant spur-of-the-moment weekend trips or planned vacations with friends to take in some shows. One year we held our family reunion in Las Vegas. Its ease of getting there by plane from anywhere in the country figured in to the decision.

Living in Bakersfield, the city known as Nashville West, means our neighbors and friends were at last Sunday night’s concert in Las Vegas. We lost several. I, personally, didn’t know any of the folks whose names and photos have appeared in the local paper and on the news.

But, I’m connected through friends and acquaintances and by geography. To the 20-year old woman who loved country music. To the brave gentleman who shielded his wife from the gunfire and lost his life. To the Bakersfield police officer who was wounded. To the woman from Tehachapi who is recovering from surgery after being shot three times. To the several other Kern County residents who were wounded or killed. And to the young Bakersfield woman and her family who’d planned to stay until Monday but, on the spur of the moment, decided to leave Sunday.

I feel for these folks and their families. I'm angry and saddened they've had to endure this trauma.

I’ve observed that change is most likely to occur when there is a personal connection to an issue, a person, or a problem. The rapid news cycle, television, social media, and travel connect us to events, people, and places and put them with us and within us forever. We are all connected.

The Las Vegas shooter’s amassing of the types and amount of weaponry we’ve seen went far beyond what the Founding Fathers meant when they instituted the 2nd Amendment.  They could not have envisioned what’s taking place in our country today. I sure didn’t.

If you’ve been wondering what you can do to help stop the carnage, please consider contacting your Congress persons and making your voice heard. If “this is not the right time," I don’t know when the right time will be. 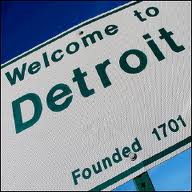 I debated on whether to go see the movie “Detroit." Did I want to have that harsh reality from 1967 in my face on the big screen – in living color?

I’d lived through those times.  But I was forty miles away, in campus housing in Ypsilanti at Eastern Michigan University with my husband and six-months-old daughter. I had relatives in Detroit, aunts, uncles, cousins, in-laws, and my parents and sister. My brother was in Viet Nam.

My fear and concern were huge, but I’m sure it was muted in comparison to the folks who survived what is now known as the riot, rebellion, or uprising, depending on who’s describing it.

Yes, I would go see the movie, wanted to see the movie. So I could discuss it and write about it. And we did, Judy and I. In Coos Bay, Oregon, at noon on a Wednesday. One other couple ventured into the theater to watch. The four of us had the place to ourselves.

The movie’s portrayal of events in Detroit and in the Algiers Motel was harsh, rattling any sense of security and confidence in justice. As I observed innocent people humiliated, dehumanized, threatened, and beaten, their dreams and lives shattered, anger and sadness re-ignited in my heart and gut.

And then came Charlottesville.

We need to talk. I’m open for discussion, thoughts, questions.  None of us has all the answers. But let’s do whatever it takes to facilitate understanding and the advancement of equality, kindness, and peace. A conversation is a beginning.

Posted by Annis Cassells at 3:57 PM 8 comments: Links to this post

Pings, chimes, catchy tunes, and wonky noises – our days are filled with constant audible notifications. Vibrations from our phones, Facebook, email, and calendars alert us, interrupt concentration and prod us to do something or go somewhere. We are always in demand. There’s a cure for that.

Recently, Judy and I experienced several days of peace and quiet, time off the grid. For our annual getaway, the “birthday jaunt,” we visited Oregon Caves National Monument and Preserve. 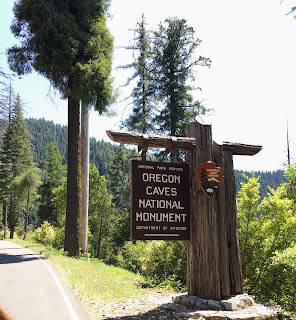 This slice of tranquility sits in the Siskiyous southeast of Cave Junction at the top of a 45-minute, breath-catching, great-for-motorcycling road. As the ranger said, “It’s a commitment.” Not just a joy ride. Well, unless you’re actually on a motorcycle.

Except when Ranger Hope Turner spoke, or someone our group asked questions, it was silent inside the cool caves, which have a constant 44 F temperature. To give us the full effect, she turned out all the lights at one point, and we were suspended in nothingness. No sound, no light. She told us about the cave insects. It was fascinating, and a bit creepy, to think of “life” going on, and thriving, in total darkness.

Judy and I did two surface hikes, the No Name and the Big Tree Loop trails. They took us through aromatic fir forests with groves of madrone, moss-covered rocks, fallen tree stumps, lacy ferns, and gurgling streams. Many folks were on the mountain, but we had the trails to ourselves. Nature’s sounds engulfed and delighted us -- the rush of the River Styx, the creeks, and the waterfalls. The birds’ calls and songs, and scampering noises of small animals on the forest floor surrounded us.

Deer families of three and four emerged at night, nibbling their way around the edges of areas that had a short time before been populated with park visitors. 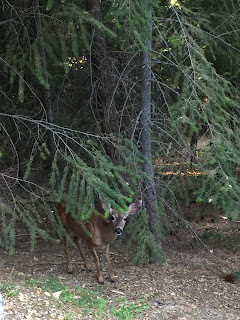 In the Chateau, the spacious guest rooms have no televisions or telephones. We slept two nights under hand-made quilts and down comforters, our windows open to the fresh mountain air and the sound of the waterfall across the parking area. 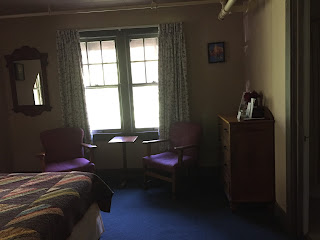 We observed scenes that threw back to the early days of the 1930s when the Chateau was built. Travelers came and went or sat in period furniture in the grand lobby, reading, writing, or conversing over drinks. The sound of the baby grand piano brought back many memories as a young man played renditions of standards and show tunes during the afternoon.

In the game room, children and parents became immersed in old-fashioned board games and older kids read to their younger brothers and sisters. Muted dining room music featured songs from the 30s and 40s. The coffee shop with its long counters and red-upholstered swivel stools reflected a time when life was slower with fewer interruptions.

Before departing we took a last walk for a short distance on the No Name Trail to capture some photos in a different light. Feeling renewed, we savored the view of the neighboring mountains and the sounds of nature that we’d been part of for our time at Oregon Caves. Then made our way down the twisty mountain road and back to civilization, our phones still silenced.

Posted by Annis Cassells at 1:45 PM 4 comments: Links to this post

Action is the Antidote 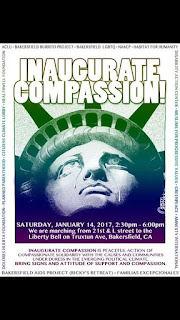 Last weekend, I got up from my computer and took action, marching with Inaugurate Compassion, a group that was organized and galvanized on Facebook.  Our march was a “Peaceful action of compassionate solidarity with the causes and communities under duress in the emerging political climate.” 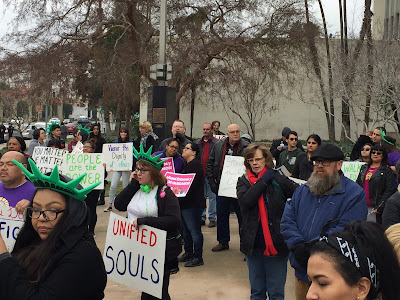 It took place in downtown Bakersfield from a parking lot on L Street to the Liberty Bell in front of the courthouse. Approximately two hundred folks took part, all of us concerned about the welfare of our community and the impending forecast for the direction our nation is heading. Because of the solidarity shown and the speeches by spokespersons of compassionate community organizations, my heart was lightened and my spirits buoyed. I’d become filled with ideas of additional ways to take action. 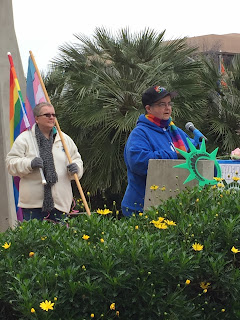 Sometimes we forget it is still our country. WE, the people. As last Saturday’s rally crowd chanted, “The people, united, can never be divided.” We’ve believed that before. That’s how we got to be the United States of America.

It’s still true today. Activists, patriots, have never forgotten this even though many of the rest of us got comfy and sat back, rested on our own laurels and enjoyed the privileges others fought for on the front lines. I sure did.

Taking action is a good thing, an invigorating thing. We feel less helpless if we can DO something. So much is happening in our country and world we can’t sit still and complain or stick our heads in the sand. It’s our job as citizens to act.

What can I do, you ask? Help out with seniors, foster youth, homeless people, or your family members who may be struggling. Support businesses and products that reflect your values. Resist tyranny, the unrestrained exercise or abuse of power. Call and write your government representatives and officials --  local, state, and national –- and tell them what you, their constituent, want them to do. Voice your opinion in letters to the editor of your newspaper. Be a good neighbor.

Get involved in your neighborhood school.  Your kids are grown or don’t live in your city? No matter; you will be living in the society run by those kids who are now in school. It’s in your best interest to help insure their academic success. Volunteer to read with kids, tutor in math, or share your life experience in a classroom.

Many things are out of our control. But we do have control over what we will do to help preserve our democracy and make our country and world places where every person has a chance to live and thrive.

“It falls to each of us to be those anxious, jealous guardians of our democracy; to embrace the joyous task we’ve been given to continually try to improve this great nation of ours.  Because for all our outward differences, we all share the same proud title:  Citizen.” Barack Obama, in his farewell address to the American people, January 10, 2017.

We are all responsible. What can you do? One resource I find helpful is Wall-of-Us.

Posted by Annis Cassells at 10:36 PM 2 comments: Links to this post