Things aren't always what they seem. Except... 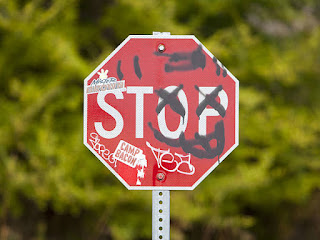 Judy and I were out for a walk to our neighborhood Starbucks at a shopping area where there’s rebuilding following a fire three years ago. An empty lot, once the gardening area of a great hardware store, stands across the walkway from the new building.

We observed a truck backed into that empty lot, the driver’s door left hanging open, and a man with a spray can in hand, spraying something on a narrow block wall. We could see the graffiti, a couple of large pink areas outlined in black and some black writing in the upper right-hand corner. Was the man adding the finishing touches? I said, “Look! That guy’s tagging in there!”

Whipping out our cell phones, we took pictures of the perp. Judy moved to a different angle to get a photo of the license plate on the front of the truck. Hmmm. No license plate and nothing on the truck to identify it or the trailer attached to it. The whole time, the man kept at it.

Once we had our coffees in hand and rounded the back side of the complex, we saw some of the construction workers and met the job boss for the rebuilding project. We told him what we’d observed, and he said he’d let the building manager know.

Satisfied we’d done our neighborly duty, we continued on our way past the empty lot. To our surprise, the man was still there! But now he wielded a different tool, some kind of long piece that he used to spray the wall. We moved to get a better look and discovered the graffiti was gone. The wall was restored to like-new! The man wasn’t tagging. He was un-tagging!

While I returned to the job boss to say we had been in error, Judy stepped over to speak with the man. He told her he was a “graffiti exterminator.” He was preparing the surfaces for repainting.

Things are not always what they seem.

But about that rioting at the U.S. Capitol on January 6, 2021, insurrection was precisely what we saw—no matter how many politicians say it was a “normal tourist day.” We watched in horror with our own eyes, felt it in our guts, gasped with every blow thrown. We know better. We witnessed. It was exactly as it seemed. 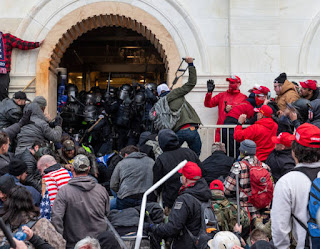 Annis Cassells
Life coach, speaker, writer, poet, teacher. Member of Writers of Kern, a branch of the California Writers Club. Sharing ideas and poems and stories that may make my day and yours. Author of You Can't Have It All: Poems Contributor in ENOUGH "Say Their Names..." Messages from Ground Zero to the World